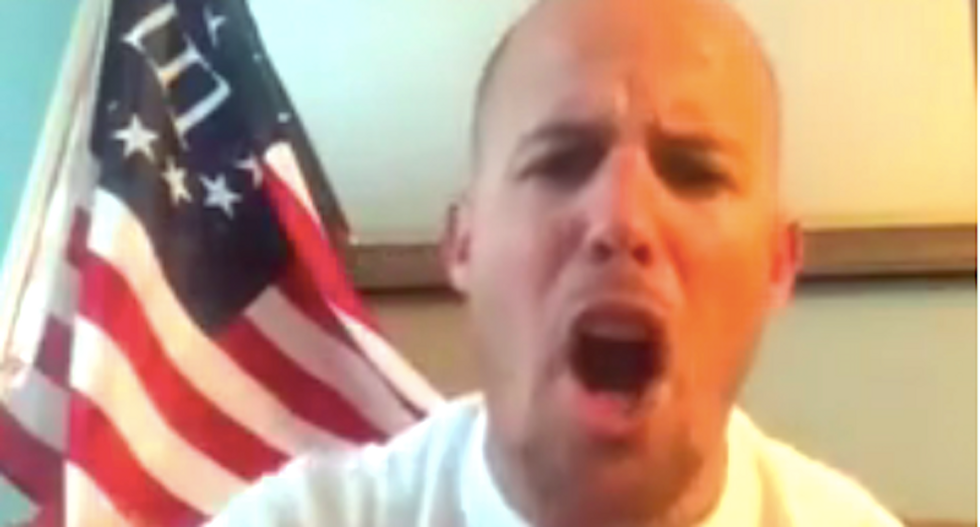 Jon Ritzheimer, an anti-Muslim militiaman from Arizona, is furious that the anti-government Oath Keepers group won't back his possibly illegal plot to "arrest" a Democratic senator for "treason."

A spokesman for the loosely organized gun group, which is primarily made up of current and former law enforcement and military personnel who vow to disobey laws they believe are unconstitutional, said the Oath Keepers did not condone Ritzheimer's plot and intended to remove him as a member.

"I'll save you the trouble," Ritzheimer ranted at the group's leaders during a six-minute Facebook video response. "I withdraw my membership. Keep my $40. You guys are clowns."

Capitol Police are investigating a plot organized by Ritzheimer, a Marine Corps combat veteran who organized a failed anti-Muslim rally in Phoenix, to take Sen. Debbie Stabenow (D-MI) into custody for voting in favor of the Iran nuclear deal.

He said in a previous statement that Stabenow was targeted as the first of many elected officials to be arrested due to her state's "lax gun laws" and strong militia presence.

Like a lot of self-styled revolutionaries, Ritzheimer apparently doesn't understand that journalists routinely highlight select quotes for their relevance or newsworthiness, rather than transcribing lengthy monologues without context or cross-examination.

He complained that some Michigan militia groups had encouraged members not to participate in his plot, which could potentially violate state law against wrongful imprisonment -- particularly if guns are used to take the lawmaker into custody.

Ritzheimer bristled at suggestions that he did not understand defendants are considered innocent until proven guilty, which he incorrectly explained in his previous video, and held up a few items he had printed off from the Internet to show that he understood constitutional law.

Ritzheimer then exploded in rage at militia members who wanted to take "the easy route" instead of trying to undo election results through possibly violent means.

"What are you doing?!" Ritzheimer bellowed. "Why is an Arizona man having to try and get an indictment for someone up in your area? This goes nationwide!"

The militiaman, who displayed a III Percenters anti-government flag during his video rant, insists that, as a combat veteran, he does not want violence but is prepared to engage in bloodshed if law enforcement authorities do not help him indict Stabenow and possibly other lawmakers.

"I've worn my gear, I've done my time -- that's the easy part," he said, after pulling on a bulletproof vest. "You're too busy rolling around out there shooting at tree stumps that you can't sit there and do the real work (and) get an indictment. Present it to the sheriff. If they don't uphold the law, that's where the militia come in."

Message for the true Patriots of America! Needs to spread before they take it down. Heres the truth from my mouth. Not the lame stream media!www.rogueinfidel.com