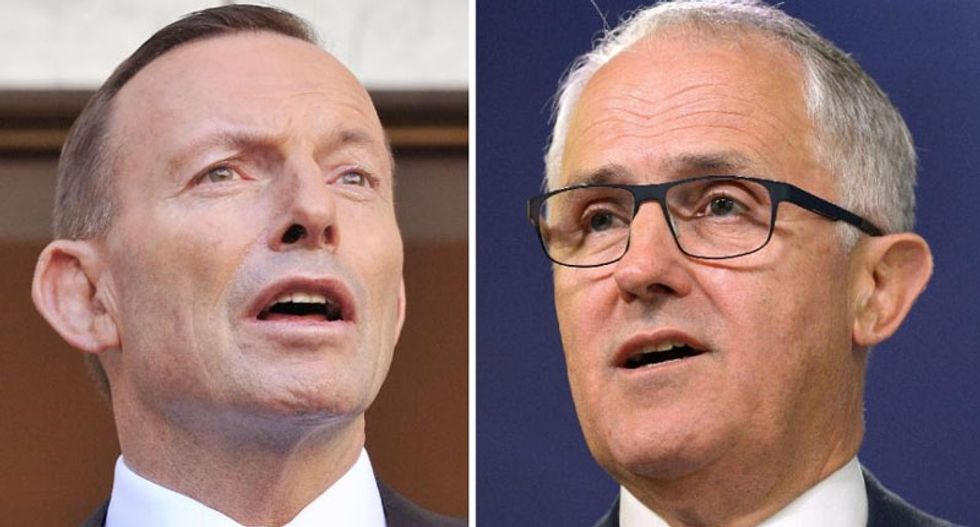 Abbott, who came to power in a general election victory in 2013, was forced into a leadership ballot among his Liberal Party colleagues after Turnbull said the coalition government faced defeat without change at the top.

After his 54-44 victory, Turnbull, a multi-millionaire former lawyer and banker, pledged to bring "economic vision" to the nation, but ruled out an unscheduled nationwide election to cement his leadership.

"This has been a very important, sobering experience today. I'm very humbled by it," he said.

"We need to have in this country, and we will have now, an economic vision, a leadership that explains the great challenges and opportunities that we face."

Abbott, whose views on issues such as gay marriage and climate change had divided many Australians, made no comment after the vote.

Former communications minister Turnbull, who was expected to be sworn in on Tuesday, said his Liberal Party-led government would be "committed to freedom, the individual and the market".

Seen as more socially progressive than Abbott, Turnbull said he intended to maintain the government's stance on issues such as climate change.

But he said that under Abbott, the government had been unable to explain its policies adequately to voters and he wanted to signal a new way forward.

"The Australia of the future has to be a nation that is agile, that is innovative, that is creative," he told reporters in Canberra, with Foreign Minister Julie Bishop by his side.

"To be a successful leader in 2015 or at any time you have to be able to bring people with you by respecting their intelligence in the way you explain."

Bishop, who had reportedly sided with Turnbull to call on Abbott to quit earlier in the day, retained her position as deputy leader of the Liberal Party by 70 votes to 30.

In the current parliament, whoever leads the Liberal Party becomes prime minister as head of the conservative coalition in which it is the senior partner.

Australian politics can be brutal and it is not the first time in recent years that a prime minister has been removed by a party room coup.

Turnbull previously led the Liberal Party in opposition before being ousted by Abbott in late 2009.

Abbott then lost the 2010 national election to Labor's Julia Gillard, who had ousted her own leader Kevin Rudd in a ruthless takeover just weeks earlier.

Moves against the unpopular Abbott had been in the works for months.

He survived a leadership challenge in February after poor polling, policy backflips and an unpopular budget generated a backbench revolt, fuelled by questions about the prime minister's judgement.

No challenger emerged at that time, after a vote on whether there should be a leadership contest was defeated 61 to 39.

But in the months since, Abbott has failed to turn around the polls, bolster the economy or stop damaging leaks from within his party.

Turnbull argued earlier Monday that the government's message was not getting through and a more open approach was needed.

The popular minister, long considered one of the most credible alternatives to Abbott, quit the cabinet in a shock move that triggered the party ballot.

In announcing his challenge, Turnbull said failure to change would mean losing power to Labor leader Bill Shorten at the next election, which is expected to be called some time next year.

He said Australia needed a style of leadership "that respects the people's intelligence, that explains these complex issues and then sets out the course of action we believe we should take".

"We need advocacy, not slogans," he said.

The Labor Party has enjoyed a solid lead over the government since last year, with a Newspoll survey last week finding 63 percent of voters dissatisfied with Abbott's performance.