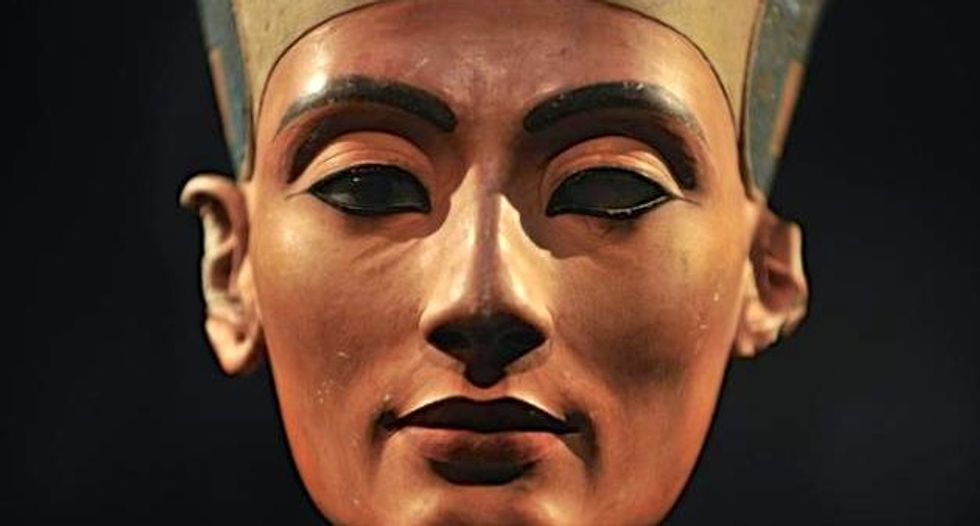 A British archaeologist who believes the legendary Queen Nefertiti may be buried in a secret room adjoining Tutankhamun's tomb is coming to Egypt to test his theory, authorities said Monday.

Egyptologist Nicholas Reeves will arrive in the country at the end of the month, a statement said.

To this day, Nefertiti's final resting place remains a mystery.

Renowned as one of history's great beauties, Nefertiti was the powerful wife of Pharaoh Akhenaton, remembered for having converted his kingdom to monotheism with the worship of one sun god, Aton.

His queen played an important political and religious role in ancient Egypt in the 14th century BC.

Reeves thinks her tomb may be a secret chamber joined to that of Tutankhamun in the Valley of the Kings at Luxor in southern Egypt.

He will arrive on September 28 to outline his theory and join Antiquities Minister Mamduh al-Damati and "the best Egyptologists in the ministry to examine the interior of the tomb", Monday's statement said.

In a study published this year, the Egyptologist at the American University of Arizona said murals in Tutankhamun's funerary chamber could conceal the existence of two doors.

Reeves wrote that high-resolution scans of the walls "reveal, beneath the plastered surfaces of the painted scenes, distinct linear traces".

He said these are "tentatively identified as the 'ghosts' of two hitherto unrecognised doorways".

Behind one such doorway could be "a still unexplored storage chamber" from Tutankhamun's burial.

But behind the other could be "the undisturbed burial of the tomb's original owner -- Nefertiti".

Although no one is sure of the identity of Tutankhamun's mother, DNA tests have been carried out and one theory is that she was Nefertiti.

DNA testing has revealed his father was a famed monotheistic king, Akhenaten.

The tomb of the boy king himself was discovered in 1922 by British archaeologist Howard Carter.

Reeves believes that Tutankhamun's premature death meant his own tomb had not yet been built, so it was decided to reopen Nefertiti's tomb 10 years after her death so he could be buried there too.

A news conference has been scheduled for October 1 in Cairo to present preliminary findings and an action plan to "verify with certainty" if hidden rooms exist and "still conceal secrets or not", the statement said.

Ministry officials said that after the preliminary examination, a second study of the tomb wall may be made using special equipment brought in from Japan.

On September 20, the antiquities ministry announced that Tutankhamun's tomb would be closed from October for restoration.

It was not clear how long the restoration work, which includes giving the tomb a new floor, would last.

Luxor, a city of half a million on the banks of the river Nile, is an open-air museum abounding with temples and tombs from ancient Egypt.