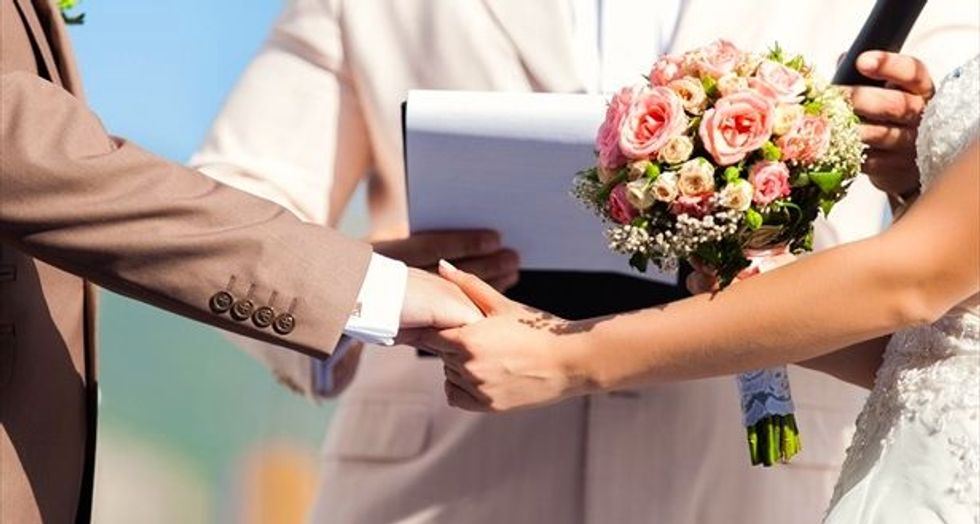 A California man and his daughter were arrested on Wednesday for arranging sham marriages between U.S. citizens and Chinese nationals who paid for the nuptials in hopes of obtaining legal residency in the United States, officials said.

Jason Shiao, 65, who posed as an immigration attorney, and his daughter Lynn Leung, 43, have been tied to than 70 immigration applications dating back to 2006, the U.S. Attorney's Office for Central California said in a statement.

They are each charged with conspiracy to commit visa fraud, and could face up to five years in prison if convicted.

In one case, the duo arranged a wedding for a Chinese national who agreed to pay $50,000 for what she thought would be a real marriage, only to learn the U.S. citizen chosen for her was a gay man, according to an affidavit.

Leung told the Chinese woman the wedding was a "business deal," the affidavit said. In other cases, the conspirators arranged fake honeymoon trips to Las Vegas, and coached the bogus couples on what to tell immigration authorities, it said.

The case stands out from similar schemes because of the high prices of $40,000 to $50,000 which Shiao and Leung were able to charge Chinese nationals for the scam marriages, said U.S. Homeland Security Investigations special agent in charge Claude Arnold.

"There has been a period of affluence in China, so there are people of means who have the money and have a desire to immigrate to the United States," Arnold said.

Investigators on Wednesday raided an office in Pasadena, northeast of Los Angeles, that Shiao set up as a fake law firm, Arnold said.

They were still searching for a third person involved in the scheme, Shannon Mendoza, 48, who is accused of recruiting U.S. citizens to be spouses.

"Should the marriage be legitimate, then there's nothing wrong with brokering a marriage," said Errol Stambler, an attorney for Leung. "If in fact the marriage is fraudulent, then it should be a crime for everybody, not just the people who would be the alleged arrangers of the marriage."

An attorney for Shiao did not return a call seeking comment.

A spokesman for the U.S. Attorney's Office said in an email that U.S. citizens who enter into sham marriages for immigration applications could be charged. Prosecutors said many of the fake spouses in this case never received the $10,000 promised them.

Fringe conservative Steve Bannon announced that the 2023 Republican agenda, should they win the House and Senate back in 2022, will be to impeach and arrest President Joe Biden.

Speaking on his radio show, Bannon explained that it was all because of what was happening at the southern border of the U.S. and Mexico.