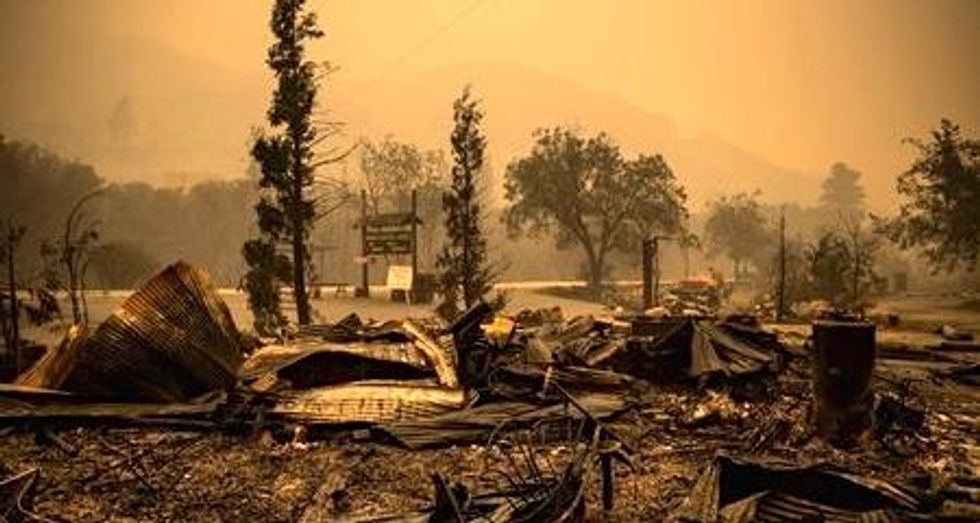 The remains of the Kings Canyon Lodge are seen after it was burnt by the so-called "Rough Fire" in the Sequoia National Forest, California, August 21, 2015. REUTERS/Max Whittaker

A wildfire raging in California's Kings Canyon National Park crossed a containment line over the weekend, forcing the evacuation of about 20 homes and prompting concern that the blaze will continue to spread, authorities said.

At 98,000 acres (40,000 hectares), the Rough Fire is the largest wildfire currently burning in California, the U.S. Forest Service said.

It has cast smoke over numerous popular hiking and camping area in the southern part of the Sierra Nevada near Fresno, prompting cancellation of tours and other activities. All campgrounds in Kings Canyon National Park were closed for the Labor Day weekend, and remained closed on Tuesday.

The park and adjacent national forest land are home to some of California's most famous giant Sequoia trees. Grant Grove, where the giant General Grant tree is located, was open on a limited basis on Tuesday, but the area was likely to be smoky, said Jim Schwarber, a spokesman for the U.S. Forest Service.

It is also affecting Sierra National Forest and Sequoia National Forest, which has the largest concentration of giant Sequoia trees in the world, according to the U.S. Park Service.

A heat wave predicted for inland parts of the state this week could exacerbate fire conditions, particularly if the winds pick up, Schwarber said.

"The weather conditions are going to continue to support active fire behavior, and there is the potential to have extreme fire behavior if higher winds develop," Schwarber said.

As of Tuesday morning, winds were relatively light at 5 to 10 miles per hour (8-16 kph), and were not immediately expected to pick up this week, the National Weather Service said.

Tony Botti, a spokesman for the Fresno County Sheriff's Deparment, said about 20 homes have been evacuated.

The homes are located in a sparsely populated area in the forest, according to Schwarber.