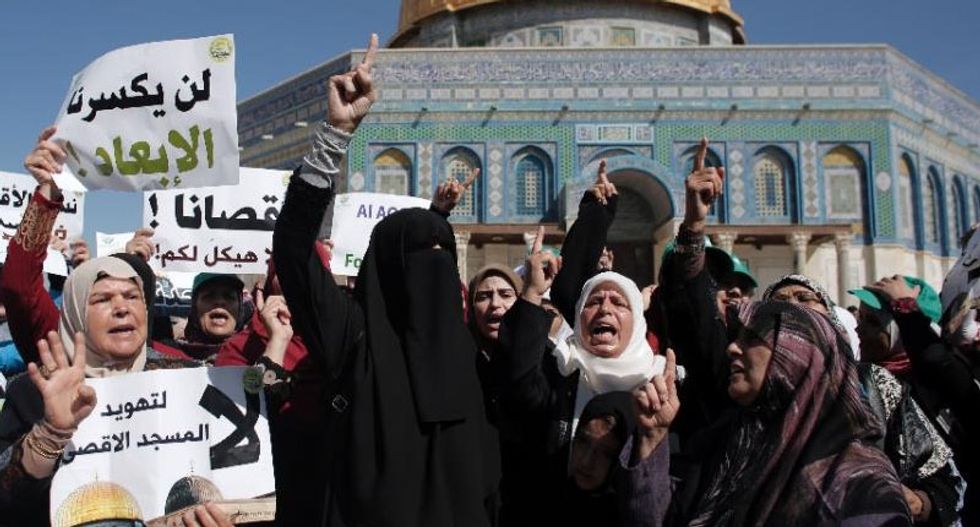 Palestinian women demonstrate in front of the Dome of the Rock after clashes with israel security forces in Jerusalem's Al-Aqsa Mosque compound, on September 27, 2015 (AFP Photo/Ahmad Gharabli)

New clashes broke out Monday between Palestinians and Israeli police who stormed Jerusalem's flashpoint Al-Aqsa mosque compound, as an expected increase in Jewish visitors to the site over the Sukkot holiday boosted tensions.

Police fired tear gas and stun grenades, while young masked protesters who had pledged a day earlier to "defend" Al-Aqsa threw stones before barricading themselves inside the mosque itself, an AFP journalist reported.

According to police, the young protesters had slept overnight at the mosque and also threw petrol bombs at security forces during the clashes, which caused a small fire at the entrance to the building.

Sources in the Jordanian-run organisation that administers the site, the Waqf, told AFP that police stun grenades provoked four fires inside the building that were brought under control.

The Palestinian Red Crescent reported 22 people wounded, with three hospitalised after being hit by rubber bullets, including one person struck in the face while inside the mosque.

Police said negotiations to have the youths leave had failed, leaving them no choice but to carry out the raid to keep them from disrupting visits to the site. Dozens of officers deployed, including on the mosque's roof.

Muslim worshippers who were at the compound after morning prayers as the raid began were forced to leave by police and all gates used by Muslims to enter the site were closed. Some remained near the gates and chanted in protest.

Regular visits by non-Muslims permitted between 7:30 am and 11:00 am were then allowed to go ahead, according to police, with 450 tourists and 24 Jews visiting. Calm later returned to the site.

The compound has been the scene of repeated clashes in recent weeks, provoking international calls for calm. The highly sensitive site is the third holiest in Islam but is also known to Jews as the Temple Mount, the most sacred in Judaism.

Recent weeks have seen a series of Jewish holidays which have led to an increase in visits by Jews that have sparked clashes. The same situation is feared over Sukkot, an eight-day religious feast that began on Sunday night.

Jews are allowed to visit the site, but cannot pray to avoid provoking tensions. Muslims fear Israel will seek to change rules governing the compound, which is located in Israeli-annexed east Jerusalem.

Israeli Prime Minister Benjamin Netanyahu has said repeatedly he is committed to maintaining the status quo despite the views of some hardliners within his governing coalition.

A campaign by a hardline Jewish minority to build a new temple at the site has further stoked suspicions.

Brief clashes had also broken out on Sunday, and afterwards young Palestinian protesters were seen preparing to "defend" the mosque during Sukkot, stocking stones inside the shrine and barricading doors.

Visits by Jews were stopped and age restrictions on Muslim men entering the compound lifted during the Muslim holiday of Eid al-Adha, which was celebrated from Thursday to Sunday.

However, a ban on Muslim men under 50 was re-imposed as Sukkot started.

Jews celebrate Sukkot, or the Fest of Tabernacles, to commemorate their journey through the Sinai wilderness to the Holy Land after their Exodus from Egyptian slavery.

The radical northern branch of the Islamic Movement in Israel and the Higher Arab Monitoring Committee, which represents Arab communities in Israel, had urged Muslims to go to the compound to defend it on Sunday.

"Al-Aqsa is a holy place, but it is also a national symbol for Palestinians and all Arabs," Sheikh Kamal Khabit, deputy head of the Islamic Movement, said.

According to Biblical tradition, the first and second Jewish temples were located at the site of the Al-Aqsa compound and destroyed by the Babylonians and the Romans.

This month over the Jewish New Year holiday, or Rosh Hashanah, police raided the compound to stop what they said were plans by Palestinian youths to disrupt visits to the site. Clashes occurred over three consecutive days.

Israel seized east Jerusalem, where Al-Aqsa is located, in the Six-Day War of 1967 and later annexed it in a move never recognised by the international community.