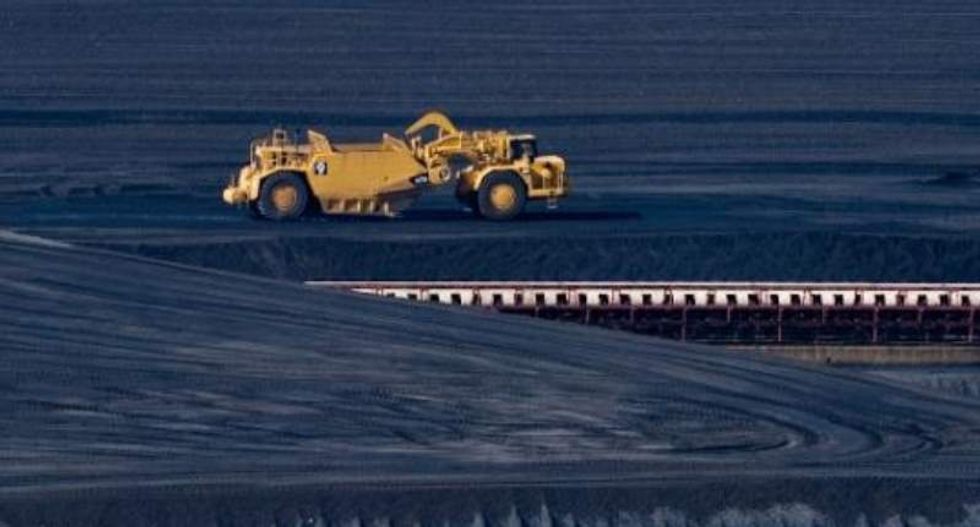 A coal scraper machine works on a pile of coal in New Haven, West Virginia on Oct. 30, 2009. Photo by Saul Loeb for Agence France-Presse.

High levels of radioactive contaminants have been found in coal ash in major coal-producing regions of the United States, raising concern about the dangers of this unregulated waste, researchers said Wednesday.

Coal ash is currently unregulated and is stored in holding ponds and landfills near coal-fired power plants, which are blamed for much of the fossil fuel pollution that is leading to climate change.

Leaks from these ponds can contaminate groundwater, and experts have long known that coal contains harmful agents such as selenium and arsenic.

"This study raises the possibility we should also be looking for radioactive elements, such as radium isotopes and lead-210, and including them in our monitoring efforts," said study co-author Avner Vengosh, professor of geochemistry and water quality at Duke University's Nicholas School of the Environment.

Radium isotopes and lead-210 occur naturally in coal, but when coal is burned "the radium isotopes become concentrated in the coal ash residues, and the lead-210 becomes chemically volatile and reattaches itself to tiny particles of fly ash," said the study.

Currently, coal ash disposal sites are not monitored for radioactivity.

"We don't know how much of these contaminants are released to the environment, and how they might affect human health in areas where coal ash ponds and landfills are leaking," said Vengosh.

"Our study opens the door for future evaluation of this potential risk."

The first-ever US regulations on coal ash disposal are set for implementation by the US Environmental Protection Agency in October.

Greenpeace has described coal ash as "highly hazardous, often containing arsenic, mercury and lead," and warned that "living in close proximity to coal ash dumps greatly increases your risk of cancer, heart damage, lung disease and birth defects, among a myriad of other serious illnesses."

China, the world's largest coal-user, produces at least 375 million tons of coal ash every year -- 2.5 times the quantity in 2002, the environmental group has said.

The United States generates 140 million tons of coal ash each year, according to the advocacy group EarthJustice.

Duke researchers said that their US study found the highest radioactivity in the Illinois basin, followed by the Appalachian and Powder River basins, the latter of which is in Montana and Wyoming.

The ratio of radium to uranium in the parent coal was consistent with the ratio found in its residual coal ash.

"This means we can predict how much potential radioactivity will occur in coal ash by measuring the uranium content in the parent coal, which is easily discerned," Vengosh said.

"This analysis can be applied to all coal ash worldwide, and is useful information for regulators, industries and scientists alike."

Cassidy Hutchinson is 'what prosecutors dream of in a witness': CNN's Elie Honig

Among other things, noted Honig, it will be very hard for former Trump officials to argue that she was merely a low-level staffer or a "Never Trump" Republican who had a grudge against the twice-impeached former president.