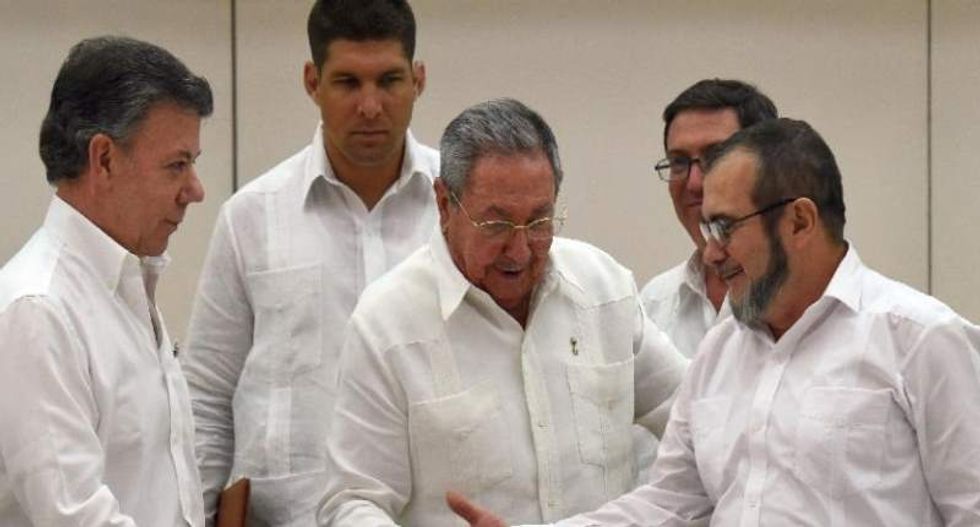 The head of the FARC guerrilla group Timoleon Jimenez (R) extends his hand to shake with Colombian President Juan Manuel Santos (L) in front of Cuban President Raul Castro (C) during a meeting in Havana on Sept. 23, 2015. Photo by Luis Acosta for Agence France-Presse.

The Colombian government and FARC rebels will sign a definitive peace deal within six months to end their half-century conflict, President Juan Manuel Santos said as the two sides announced a major breakthrough.

Santos and FARC leader Timoleon "Timochenko" Jimenez presided over a ceremony where the government and rebel leaders signed a deal on justice for crimes committed during the conflict, which had been the key issue blocking progress in dragging peace negotiations.

Santos said he and Timochenko "have agreed that at the latest in six months -- six months -- these negotiations must conclude and the final peace accord must be signed."

"It's not going to be an easy job because there are still difficult points to agree upon, but that is the instruction we have given to our delegations: they must complete the accord as soon as possible," he said.

US Secretary of State John Kerry hailed what he called "historic progress" in finally ending a conflict that killed more than 220,000 people and uprooted six million.

"Peace is now ever closer for the Colombian people and millions of conflict victims," he said.

Santos had made a surprise trip to Havana, where the talks have been taking place, for the signing ceremony.

It was the first time he has appeared at the negotiations he set in motion nearly three years ago, which he has staked his presidency on successfully concluding.

It was also the first time he had met Timochenko, with whom he shook hands after the deal was signed -- the president clad in a white dress shirt, the guerrilla in a white Cuban-style "guayabera" shirt with pockets.

The talks in Havana, which began in November 2012, had stalled over the thorny question of whether guerrillas will face prison for kidnappings, use of child soldiers, cocaine trafficking and other crimes.

The new deal includes a broad amnesty, though it will not cover "crimes against humanity, serious war crimes" and other offenses including kidnappings, extrajudicial executions and sexual abuse, said officials from Cuba and Norway, the countries mediating the talks.

It also includes the creation of special courts with both Colombian and foreign judges to try those charged with the most serious crimes, they said.

Santos, 64, once led a merciless crackdown on the FARC as defense minister.

But he switched gears on becoming president in 2010, and won re-election last year vowing to see through the peace process he started.

The Colombian conflict began in the turbulent aftermath of a peasant uprising with the founding of the FARC in 1964.

The breakthrough comes on the heels of a visit to Cuba by Pope Francis, who warned Sunday that Colombia could not afford "yet another failure in peace talks" and called for "definitive reconciliation."

Over the decades, the Colombian conflict has drawn in not only government troops and various leftist rebel groups, but also right-wing paramilitary groups -- now officially disbanded -- and drug traffickers.

There are six broad items on the agenda at the talks.

Deals have already been reached on three of them: land reform, political participation for ex-rebels and fighting the drug trafficking that has fueled the conflict in the world's largest cocaine-producing country.

Besides the justice issue -- part of broader discussions on victims of the conflict -- the other unsettled questions are disarmament and the mechanism by which the final accord will be ratified.

The FARC, the largest leftist guerrilla group still active in Colombia, has an estimated 7,000 fighters.

The other remaining rebel group, the National Liberation Army (ELN), has about 2,500.

The ELN and the government have been in "exploratory" talks since January 2014, but have not yet opened a formal peace process.