Could Hillary Clinton's candidacy unravel over her emails? 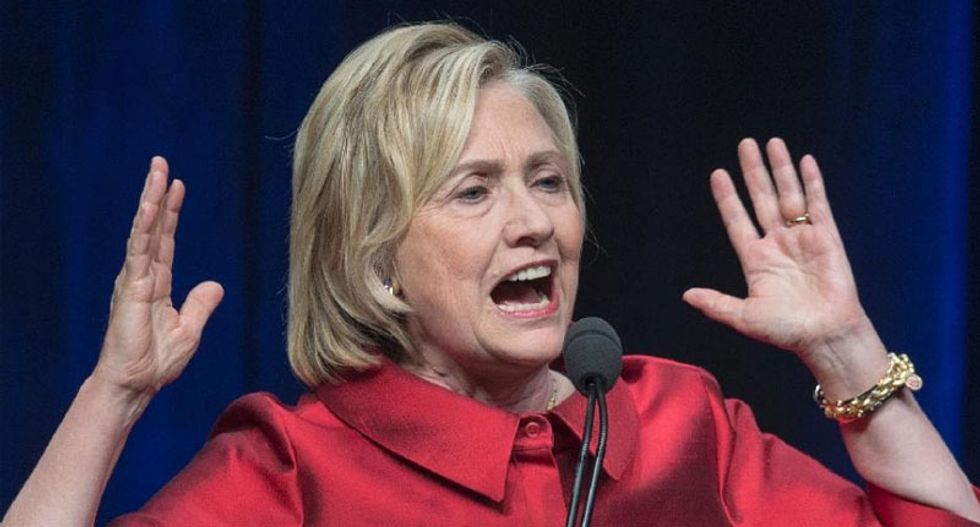 Former secretary of state Hillary Clinton first insisted there was "no classified material" in her emails, but shifted weeks later, telling reporters the emails were not marked classified at the time they were sent (AFP Photo/Paul J. Richards)

She remains Democrats' best hope -- for now -- to retain the White House, but Hillary Clinton has failed to shake an unremitting email scandal that has dragged down her perceived trustworthiness and upended her campaign.

On Monday, the State Department released 4,000 more messages that the former secretary of state sent or received on a private email account and a so-called "homebrew" private server.

But the attached revelations that some 150 others have been retroactively classified has only heightened suspicions about the Democratic frontrunner, whose email activity is currently under FBI investigation.

"I think it's been very damning," former Florida governor and Republican presidential hopeful Jeb Bush told Fox News on Tuesday. "She's got a serious problem for sure."

Clinton's poll numbers are trending downward. Rival candidate Bernie Sanders, 73, who describes himself as a democratic socialist, is gaining on her.

Even Vice President Joe Biden, who has twice sought the presidency unsuccessfully, is considering jumping into the race against the most scrutinized Democratic nominee in decades, a woman who aimed to plant the flag of gender equality at 1600 Pennsylvania Avenue.

Might one of the most resilient politicians in US history, who has faced criticism of her failed health care reform while she was first lady, her role in responding to the Benghazi attacks and her husband's ignominy, ultimately be derailed by her email snafus?

While the verdict is still out, experts have taken to updating, with a Clintonian twist, the immortal question about the 1970s Watergate scandal that brought down president Richard Nixon.

"What did Hillary know and when did she know it?" asked law professor Nathan Sales of Syracuse University College of Law.

"The latest revelations are potentially very, very damaging, although it's too soon to say for sure," he told AFP.

Sales points to some of the classified data believed to have been transmitted via email to Clinton, particularly material that an inspector general told Congress in July should have been marked "Top Secret" and "TK," or "Talent Keyhole."

That top-level designation refers mainly to satellite imagery or intercepts from the intelligence community, data Sales said would be "so obviously sensitive that anybody with a security clearance would know not to send it."

He said someone at the State Department could be indicted over the emails.

"It is increasingly likely that staffers there are looking down the barrel of some very serious allegations," Sales said.

"The million-dollar question is whether Clinton herself can be held criminally liable."

While the concerns for Clinton's presidential campaign might be an "atmospheric" malaise instead of a five-alarm fire of a scandal, Sales said the email problem is perhaps the first "electronic issue" that has the potential to drag down a White House campaign.

Merle Black, a political science professor at Emory University, called the email quandary extraordinary and "very Nixonian," in the sense that accusations of misconduct have persisted, and the tone is one of secrecy, despite Clinton's pledge of full compliance with official orders.

Clinton first insisted that there was "no classified material" in her emails.

But she shifted weeks later on the campaign trail, telling reporters the emails on her server were not marked classified at the time they were sent.

The Washington Post reported Tuesday night that Clinton "wrote and sent" at least six of the emails that are now classified, seeming to run counter to public statements she had made on the issue previously.

The controversy now sees "major figures in the Republican Party using her as a punching bag, and she hasn't been able to effectively punch back on that issue," Black said.

An indictment of Clinton is still "remote at this stage," he noted.

"But her problem is not just legal. She's already taken a huge hit in perceptions of her as someone who is trustworthy."

For many Democrats, though, the email intrigue is not a top issue.

Des Moines Register poll results Monday from early-voting Iowa showed that 76 percent of Clinton supporters, and 61 percent of all likely Democratic caucus-goers, say the email controversy is not important to them.

Thirty-eight percent said it was somewhat or very important.

Even if Clinton wins her party's nomination, Black said concern could linger. Independents, whom she would need in order to win, would prove a problem for her, particularly if Democrats stay home out of frustration.

"She is a wounded candidate now," he added.