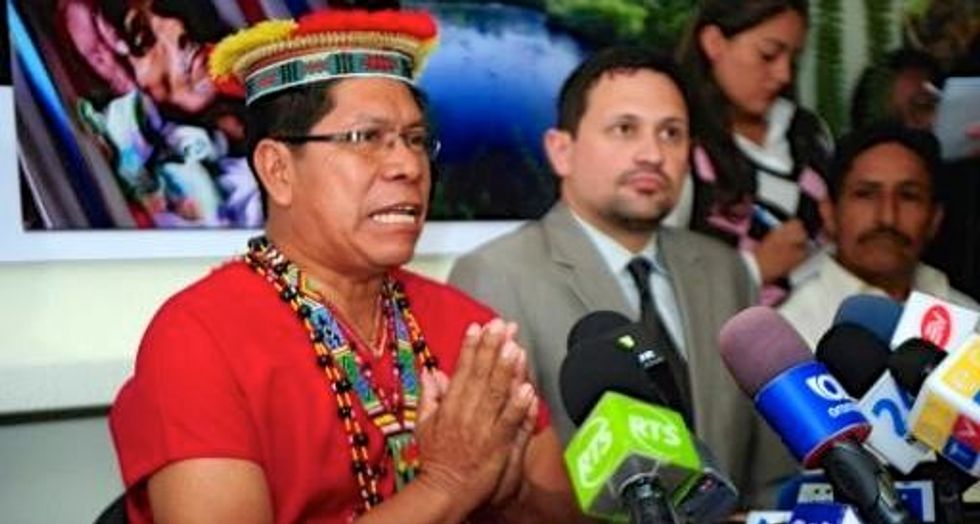 Ecuadoran villagers can seek to enforce in Canada a multi-billion-dollar Ecuadoran judgment against US oil giant Chevron (Swiss: CVX.SW - news) on pollution in the Amazon rainforest, the country's top court said Friday.

However, the decision only establishes jurisdiction and does not settle the claim itself.

In Canada and in parallel legal fights in the United States and Brazil, the indigenous people of Ecuador's Lago Agrio region have sought to collect compensation for the mass dumping of oilfield waste between the 1970s and 1990s, after an Ecuadoran court ordered Chevron to pay $9.5 billion in damages.

The environmental destruction was allegedly committed by Texaco, which Chevron bought in 2001.

The villagers had asked the Ontario Superior Court to force Chevron to hand over Can$12 billion (US$11.3 billion) in Canadian assets held by subsidiaries.

The court turned them down, but they won on appeal.

The oil company has refused to pay, alleging fraud and bribery was used to obtain the ruling in Ecuador and maintains that its Canadian subsidiaries are wholly independent and have nothing to do with the case.

In March 2014, a US court ruled that the Ecuadoran judgment was the product of "fraud and racketeering" and was unenforceable in the United States.

In its decision Friday, the Canadian Supreme Court said "Chevron Canada has a physical office in Ontario, where it was served. Its business activities at this office are sustained; it has representatives who provide services to customers in the province. Canadian courts have found that jurisdiction exists in such circumstances."

"In an enforcement process like this for the collection of a debt against a third party, assets in the jurisdiction through the carrying on of business activities are undoubtedly tied to the subject matter of the claim," it said.

But it added that "a finding of jurisdiction does nothing more than afford the plaintiffs the opportunity to seek recognition and enforcement of the Ecuadoran judgment."

Thousands of villagers in the polluted area say they were sickened and that many have cancer from the contamination of their water supply from oil spillage.

Chevron contends that Texaco paid all of the required clean-up costs before leaving the country in the 1990s.

In a statement, its Canadian subsidiary said the latest ruling "has no bearing on the legitimacy or enforceability of the fraudulent Ecuadoran judgment."

"The facts remain, as Chevron Corp. established in the United States, that the Ecuadoran judgment is the product of fraud and other misconduct, and is therefore illegitimate and unenforceable," it said.