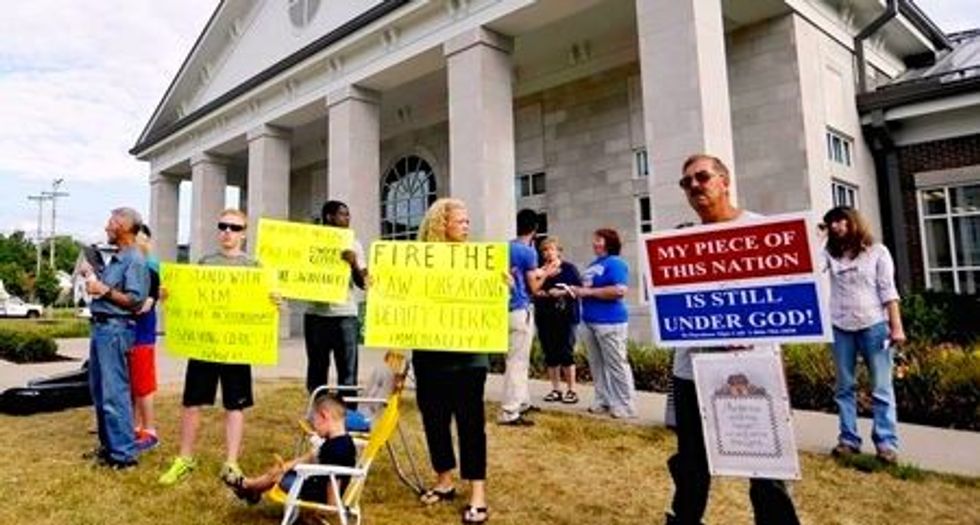 Supporters of Kentucky county clerk Kim Davis, who refused to issue marriage licenses to gay couples due to her religious beliefs, said on Wednesday that any of her deputies who provide such documents without her permission should be fired.

U.S. District Judge David Bunning ordered Davis released on Tuesday after six days in jail, warning her not to interfere with her deputy clerks who are issuing the licenses, or face further sanctions.

Bunning had found Davis, clerk for Rowan County in eastern Kentucky, in contempt after she stopped issuing licenses to any couples, citing her belief as an Apostolic Christian that a marriage can only be between a man and a woman.

The issuance of marriage licenses to same-sex couples in Kentucky and other states has become the latest focal point in the long-running debate over gay marriage in the United States.

Ante Pavkovic, one of the people who helped organize pro-Davis rallies outside the Grayson, Kentucky, detention center where Davis was jailed, lectured the deputy clerks not to violate their oaths of office, like Bunning and the U.S. Supreme Court justices who backed gay marriage did.

"Do not join them in this any further, and if you can't do that, then you should just quit," Pavkovic, 49, of North Carolina, said, standing in the clerk's office in Morehead, Kentucky.

He waved a sign in the faces of the deputy clerks that read, "Fire the cowardly clerks that are lawbreakers." He was asked to leave by a deputy sheriff.

Davis will return to her $80,000-a-year job on Friday or Monday after spending time with family. However, her lawyer, Mat Staver, founder of Christian religious advocacy group Liberty Counsel, said on Tuesday her position had not changed, raising the possibility she could return to jail if she moves to block the issuance of licenses.

Raising the stakes further, deputy clerk Brian Mason said on Wednesday he would continue issuing marriage licenses after Davis returns, even if she tells him not to. "I'm still going to issue licenses," he said.

The U.S. Supreme Court issued a ruling in late June legalizing it in all 50 states, but a small number of elected clerks and lower-level judges have voiced opposition on religious grounds.

Some in Texas, Alabama and elsewhere have refused to issue licenses to anyone, gay or straight.

At the Rowan County clerk's office on Wednesday, the first of seven gay couples to obtain marriage licenses last week returned to have the documents legally filed. Ten licenses in all have been issued.

Nashia Fife, secretary-elect of the Rowan County Rights Coalition, which supports the rights of gay couples to get marriage licenses, said the struggle over the issue has exposed divisions that were not visible before.

"The ante has been upped at this point," she said of Bunning's warning to Davis not to interfere.

Another of the gay couples who got a marriage license last week remained wary about what they would face when they return to have the document filed by the clerk's office.

"I guess I'm pessimistic, but I'm hopeful," David Moore said on Tuesday evening, confirming he had not yet married partner David Ermold.

Staver, Davis' lawyer, said his client still wants an accommodation to remove her name and her authority from the marriage certificates.

Bunning secured assurances from the five of six deputy clerks that they would comply with the court order and issue licenses to all legally eligible couples. Only Davis' son Nathan refused, but he was not jailed.