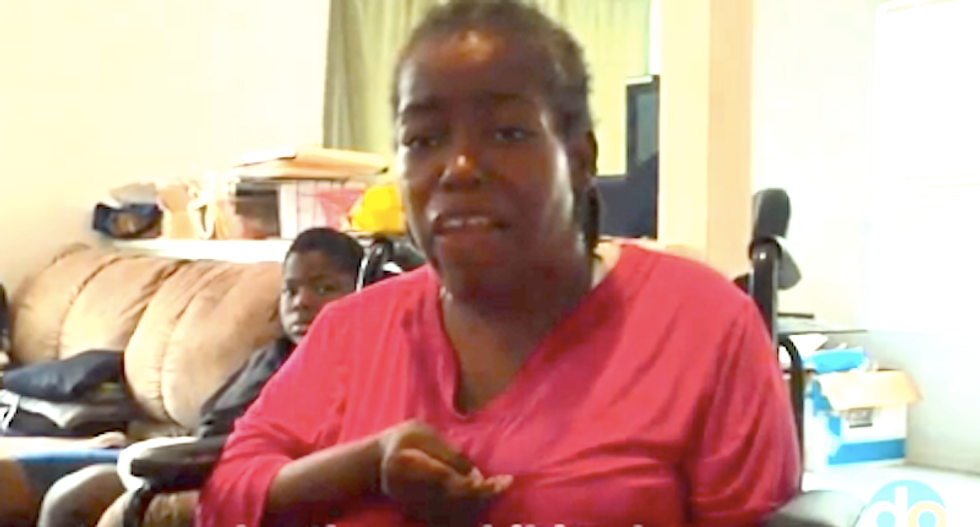 A physically and mentally disabled couple said Delaware police beat the husband during an early morning drug raid at a relative's home.

The Rehoboth Beach couple said state police found Ruther Hayes, a disabled veteran who takes medication for schizophrenia, giving a sponge bath to his wife, Lisa, when they burst into her mother's home June 30, 2014, looking for two relatives, reported The News Journal.

Police arrested two nephews at the home, but only one of them was charged with a drug crime, and he eventually pleaded guilty to one count of possession of drug paraphernalia.

Officers with the Special Operations Response Team found the disabled couple, who were staying with Lisa Hayes' mother for two weeks while their daughter attended an ice skating camp, in a back bedroom of the home, according to a lawsuit.

Five family members had already told police that Lisa Hayes, a quadriplegic with cerebral palsy, was unable to use her legs, and the lawsuit claims officers should have seen her wheelchair in the bedroom where her husband bathed her.

But state troopers pointed their guns at the disabled woman and “shouted at her to do that which she could not: stand up,” the lawsuit claims.

Ruther Hayes tried to cover his partially nude wife with a sheet, but the lawsuit shows that police shoved him to the ground and repeatedly punched him before shocking the mentally ill man twice with a stun gun.

State police detained Ruther Hayes and charged him resisting arrest, although the charge was later dropped.

“I feel not only degraded, humiliated -- I feel like they didn’t treat me as a human being,” Lisa Hayes said. “I relive that day when they came in on me and them yelling at me to get up when they knew that I couldn’t get up.”

Both of her nephews, as well as other family members, told police their aunt was disabled before they entered the back bedroom -- but officers dismissed their claims.

“That’s enough out of you,” one said, according to the lawsuit.

The troopers -- identified in the lawsuit as a trooper named Christopher Popp, a Cpl. Doughty and a Cpl. Torres -- rammed open the bedroom door and ordered Lisa Hayes to "get the f*ck up."

Ruther Hayes told the officers he was a disabled veteran and showed his military ID before trying to lay a sheet over his wife, who was naked from the waist down.

That's when police grabbed his arms and began to punch him repeatedly.

"Because Mr. Hayes (a disabled veteran) did not immediately fall, an (officer) said, ‘He must have been well trained,'” said Cpl. Doughty, according to the lawsuit.

Another officer shocked Ruther Hayes on the shoulder, and he fell to the ground and bloodied his nose, but officers continued to beat him and stunned him a second time.

Lisa Hayes watched helplessly from the bed before crying out that she was having a heart attack, the lawsuit claims, and police ended the beating and called an ambulance.

Lisa Hayes said her husband's schizophrenia has grown more acute since the raid, and she's now afraid to enter her mother's home.

The suit asks a federal judge to award damages to the couple and to force state police to change its policies and training on excessive force and dealing with disabled people.

Watch this video report posted online by The News Journal: