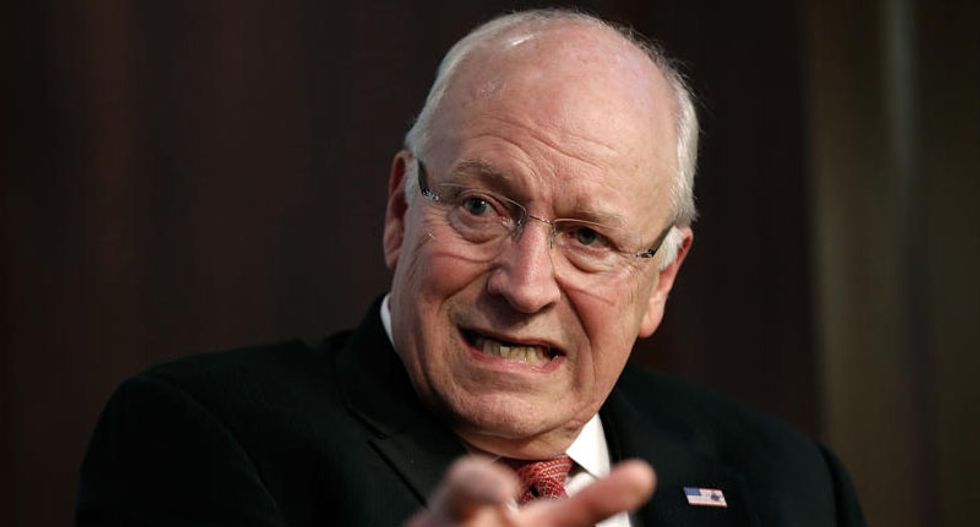 Dick Cheney has defended the Bush administration’s approval of the use of torture again in a new book about American exceptionalism written with his daughter Liz Cheney.

The book, Exceptional, argues that the United States is “the greatest force for good the world has ever known” and should remain so in spite of a current run of poor leadership by President Barack Obama.

It includes Cheney’s latest rebuttals of charges that he damaged the United States by sanctioning torture after the 9/11 attacks and by backing the 2003 invasion of Iraq.

Here are some key passages from the book, which is on sale today, published by Simon & Schuster .

On “enhanced interrogation” having “kept us safe”:

To call enhanced interrogation a program of torture, as President Obama has so many times, is to libel the dedicated professionals who saved American lives, and to cast terrorists and murderers as innocent victims …

Ending programs that kept us safe, revealing the details about those programs to the terrorists, and spreading untruths about our policies was misguided, unjust, and highly irresponsible. It was recklessness cloaked in righteousness. It was my view then and remains so today, that President Obama, having so consistently distorted the truth about the enhanced interrogation program and the brave Americans who carried it out, is in no position to lecture anyone about American values.

On Barack Obama being wrong about America:

Where some see an exceptional nation, unmatched in the history of the world in our goodness and our greatness, in our contributions to global freedom, justice, and peace, Barack Obama sees a nation with at best a “mixed” record. Yes, there was a successful outcome to the Cold War, but it brought us, he writes, “the distortions of politics, the sins of hubris, the corrupting effects of fear,” not to mention “an enormous military buildup” that has, in his view, warped the way US leaders view the world. That buildup, of course, was essential to our winning the Cold War.

On the decision to invade Iraq:

Saddam’s Iraq was the most likely nexus between the terrorists and the devastating weapons they sought. Twelve years, sixteen UN Security Council resolutions, international sanctions, and no-fly zones had failed to diminish the threat Saddam posed. As the sanctions regime began to crumble, the calculation about the nature of Iraq’s threat to the United States and the need for military action to defeat Saddam was very different in 2003 than it was in 1991. We did the right thing in 1991 and in 2003.

On the tragedy Barack Obama created in Iraq:

When President Obama took office in January 2009, al Qaeda in Iraq had been defeated. Iraq was a stable nation moving toward true democracy, allied with America in the heart of the Middle East. The real proof that things were in good shape as President Obama took over is that his administration immediately set about trying to claim credit for the situation…

President Obama failed to understand that Iraq’s security, sovereignty, and stability were fragile. It is a tragedy that he abandoned Iraq, sacrificing the gains secured by American blood and treasure. We have not yet begun to see the full cost of that decision.

On how the United States will survive Barack Obama:

As we have written this book, we have sometimes been dispirited. The damage that Barack Obama has done to our ability to defend ourselves is appalling. It is without historical precedent. He has set us on a path of decline so steep that reversing direction will not be easy. But then we call to mind America’s resilience and the historical fact that great leaders have rallied us before and surely will again.

We are not just one more nation, one more indistinguishable entity on the world stage. We have been essential to the preservation and progress of freedom, and those who lead us in the years ahead must remind us, as Roosevelt, Kennedy, and Reagan did, of the special role we play. Neither they nor we should ever forget that we are, in fact, exceptional.

On the United States as a custodian of freedom:

Our children need to know that they are citizens of the most powerful, good, and honorable nation in the history of mankind, the exceptional nation. Ordinary Americans have done heroic things to guarantee her survival. America’s future, and the future of freedom for all the world, now depends on us.

On the United States as a force for good:

We have guaranteed freedom, security and peace for a larger share of humanity that has any other nation in all of history. There is no other like us. There never has been. We are, as a matter of empirical fact and undeniable history, the greatest force for good the world has ever known...

We did not seek the position. It is ours because of our ideals and our power, and the power of our ideals. In the words of British historian Andrew Roberts, “In the debate over whether America was born great, achieved greatness, or had greatness thrust upon her, the only possible conclusion must be: all three.”

On the United States as a force for good (again):