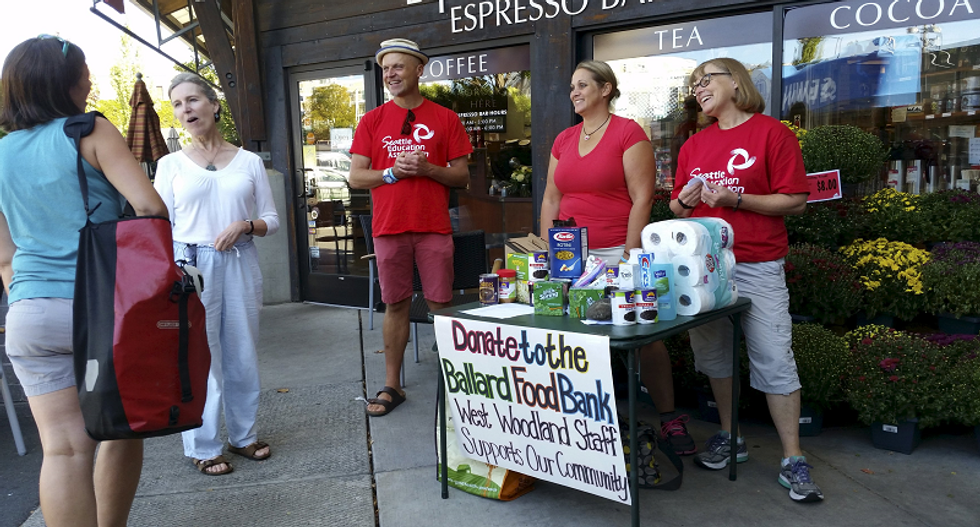 The Seattle public school district and a teachers union resumed talks on Saturday, three days after the instructors went on strike and idled 53,000 students, officials said.

The strike has left some parents scrambling to find childcare placements for children, who should have been resuming classes after the summer break.

Representatives for the Seattle Education Association and Seattle Public Schools met separately with state mediators on Thursday and Friday.

The two sides came together for talks on Saturday, said district spokeswoman Stacy Howard and union representative Rich Wood. The resumption of direct negotiations had been expected.

Some 5,000 instructors and support staff walked off the job and onto picket lines on Wednesday, which was supposed to have been the first day of classes for the district's 53,000 students. Extended talks had collapsed the night before in disagreement over wages, hours and performance evaluations.

The strike, which has forced the shutdown of all of Seattle's nearly 100 public schools, marked the first contract-related disruption of classes in three decades for the largest public education system in the Pacific Northwest.

One of the teachers' chief grievances is they have received no cost-of-living raise in six years despite surging living expenses, particularly for housing, that in turn have been fueled largely by growth in the city's technology industry.

The walkout comes at a time of increased scrutiny of education spending in the state. The Washington state Supreme Court last month fined the state $100,000 for every day it failed to present a court-ordered plan for fully funding public schools..

The district's latest offer to the union included $62 million in pay raises, staff increases for special education and 20 minutes of added instructional time after two years, Howard has said. She said the union was demanding $172 million in increased wages and benefits.