Dixie-singing Kim Davis supporter: ‘The Court has had many opinions — but they are not law’ 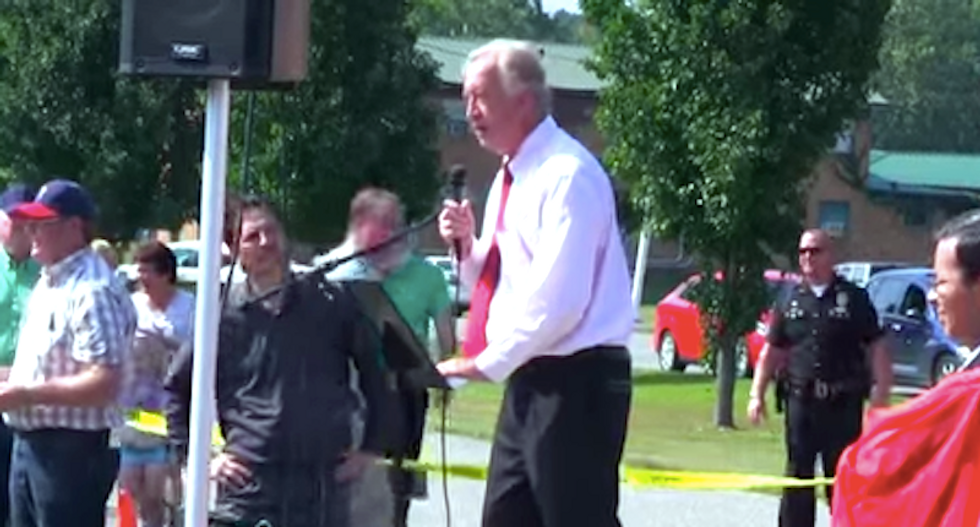 A pro-Confederate Maryland Republican is using the Kim Davis legal saga to promote his theocratic agenda.

Michael Peroutka, who sang "Dixie" as the national anthem at a secessionist meeting, believes that the U.S. and state governments are no longer valid because they have failed to uphold "God's law."

He also makes the same claims as Republican presidential candidate Mike Huckabee to back the defiant Kentucky county clerk jailed for contempt after refusing to follow the U.S. Supreme Court ruling and multiple court orders and issue marriage licenses to same-sex couples.

"There is no law that requires her to grant a marriage license to people of the same sex," said Peroutka, a debt collection lawyer who sells videos of himself lecturing on the Constitution.

"The Court has had many opinions," he added, "but they are not law."

Huckabee, who traveled to Kentucky to take part in a pro-Davis rally outside the Carter County Detention Center, argued last week that Supreme Court rulings do not supersede state laws.

“Can you quote the statute that has been passed by the people’s elected representatives? No,” Huckabee said. “The only law (Davis) is following is the Kentucky law, which by constitutional amendment defines marriage as a man and a woman.”

However, legal experts have dismissed the pro-Davis arguments as specious.

Peroutka has promoted his American View group on printed signs handed out at rallies supporting Davis -- including a protest Monday afternoon outside the private residence of the federal judge who held the county clerk in contempt.

“The Kentucky constitution has never been altered in any way,” said the Rev. Philip "Flip" Benham, the leader of the anti-abortion Operation Save America group that organized the protest. “(Davis) is guilty of keeping the law, and the judge, David Bunning, has found her in contempt of his court. We are holding Judge Bunning in contempt of almighty God.”

Like Davis, the defiant Rowan County clerk, Peroutka is no stranger to official sanctions for misconduct in public office.

An Anne Arundel County ethics panel advised Peroutka, who was elected a county councilman last year, to take down videos promoting his ultra-conservative Institute on the Constitution -- which advances the "Biblical Worldview of America’s Founders" in paid online classes.

"There is an elected official in jail, in my view, for keeping her oath," Peroutka said. "She's not a law breaker -- she's a law upholder."

Two days after the ethics commission urged Peroutka to take down the videos, he set up another website Peroutka Town Hall, to host his lectures -- which explain his 10-point process for considering each of his official votes.

For example, he approved a bill on zoning and workforce housing after consulting Exodus and deciding the measure would restore local control to communities.

Peroutka donated an allosaurus skeleton last year to the Creation Museum through the anti-abortion Elizabeth Streb Peroutka Foundation he operates with his daughter, Elizabeth, and brothers Michael and Stephen.

The 62-year-old Peroutka was the 2004 Constitution Party candidate for president, which attracted the support of conspiracy theorist Alex Jones and conservative pundit Pat Buchanan, and he promoted his candidacy on the white nationalist radio program “The Political Cesspool.”

Peroutka, a former board member of the League of the South, argued that it was a "legal fallacy" to grant courts the authority to make law, and he dismissed the Constitution's Equal Protection Clause in the 5th and 14th Amendments as the basis of the court's ruling in Obergefell v. Hodges.

"The courts have generally used that approach to accomplish what the federal government could not by legislation," he said. "It's an end-run around the clear language of the Constitution."

Watch video of Peroutka speaking at a Davis rally posted online by News With Views: