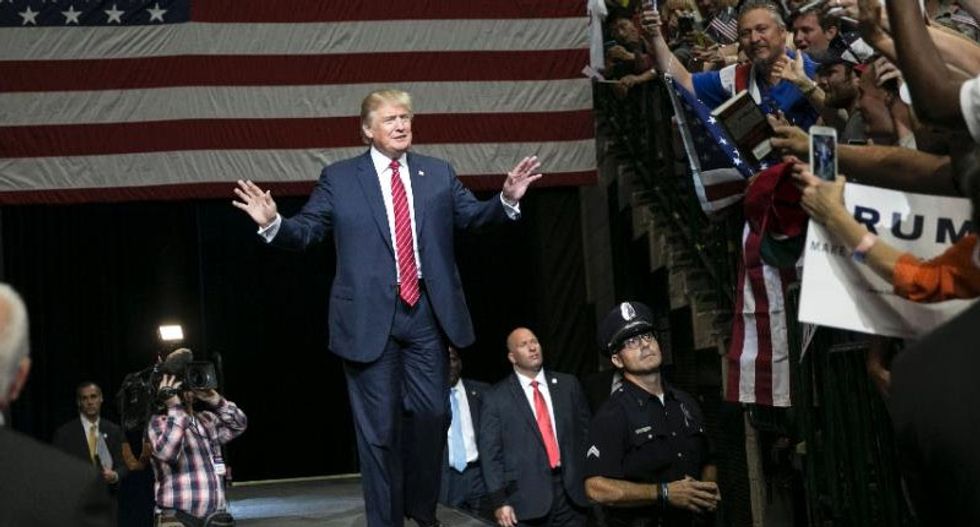 Republican firebrand Donald Trump has promised to scrap taxes for America's poorest and offer healthcare for all if elected president -- paid for by renegotiating the NAFTA accords and picking a trade fight with China.

The Republican presidential frontrunner and billionaire businessman promises to unveil Monday what the national economy would look like under a President Trump.

In an interview broadcast Sunday on CBS News's "60 Minutes" program, he presented an outline of that program, insisting he had a recipe for balancing the country's books while cutting taxes across the board.

"There will be a large segment of our country that will have a zero rate," the real estate mogul said of his tax plan. "We're talking about people in the low-income brackets that are supposed to be paying taxes -- many of them don't anyway," Trump said.

The reality television star promised to do away with President Barack Obama's signature health reform program, and replace it with a rival plan to provide coverage for every American.

"They're going to be taken care of. I would make a deal with existing hospitals to take care of people," Trump said.

"The government's going to pay for it. But we're going to save so much money on the other side."

Pressed to explain the financing of his pledges, the real estate mogul said the nation's $19 trillion federal debt would be erased by expanding the economy, "if the economy grows the way it should grow," and by recovering manufacturing jobs lost overseas.

Trump displayed little patience for the North American Free Trade Agreement (NAFTA), which he vowed to do away with.

"We will either renegotiate it or we will break it," Trump said, "because, you know, every agreement has an end."

And he vowed to bring China to heel for its recent devaluation of the yuan, which he said has bolstered Beijing's export markets and hurt America's trade balance.

"They will respect me. They won't be doing it," Trump said. "If they don't come to the table, they're going to have a tax when they put their products into this country. And they're going to behave."

Trump laid out an equally mercurial approach to foreign policy, when asked how he would combat Islamic State group and deal with Syrian President Bashar al-Assad.

"Why aren't we letting ISIS go and fight Assad and then we pick up the remnants? Why are we doing this? We're fighting ISIS and Assad has to be saying to himself, 'They are the nicest or dumbest people that I've ever imagined'," Trump said.

He added, as an afterthought, that another approach might be to simply let Moscow destroy the radical jihadi group.

"What the hell do we care?"