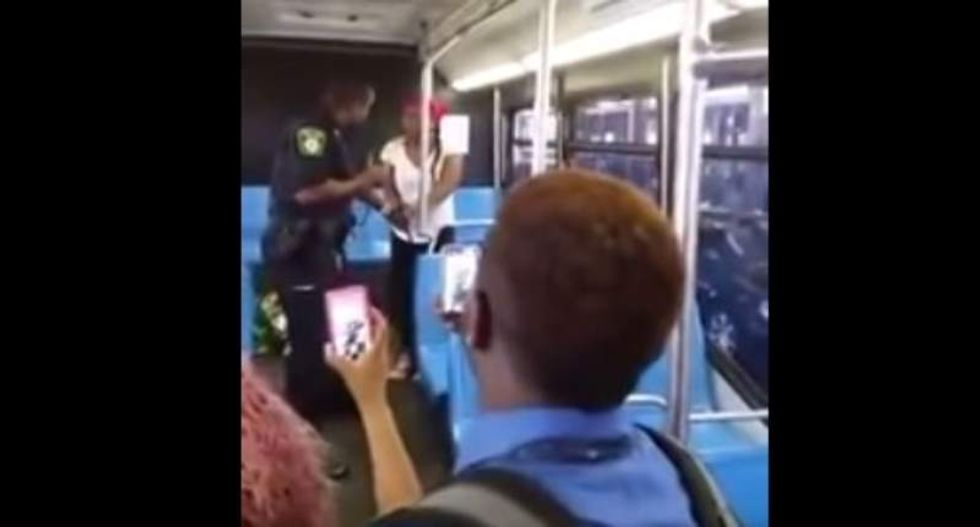 An unidentified woman struggles against a Boston police officer during a Sept. 18 encounter. [YouTube]

A group of witnesses can be heard convincing a Boston transit police officer not to escalate the conflict during a struggle with an unarmed woman, Photography Is Not A Crime reported.

The video, which first surfaced online last week, begins with the officer fighting the woman in the back of a bus stopped in Dudley Square while trying to arrest her for theft.

But according to transit police spokesperson Richard Sullivan, "If you saw the video in the beginning, the officer asks that woman to step off the bus so he can conduct an investigation. She refused to do so, and became actively non-compliant and assaultive."

Sullivan said a passenger on the bus told the officer that the woman stole from them. But there is no indication of any theft on the video posted online.

Witnesses can be heard at the beginning of the video telling the woman to "chill out" before one moves closer to her and the officer. At that point, the officer draws his weapon and moves toward the crowd. He then turns back to the woman with his gun still off. A man can be heard saying, "Drop the gun, chill! It's not that serious."

After a few seconds -- during which another man yells, "Drop the f*cking gun," the officer puts his weapon back in the holster. The woman then swings at the officer again, prompting the crowd to tell her to calm down.

About two minutes into the video, more officers enter the bus and order the passengers off. One of the passengers can be seen with his own phone recording the incident and saying, "You maced her."

Sullivan said the officer has been placed on administrative duty while the incident is under investigation.