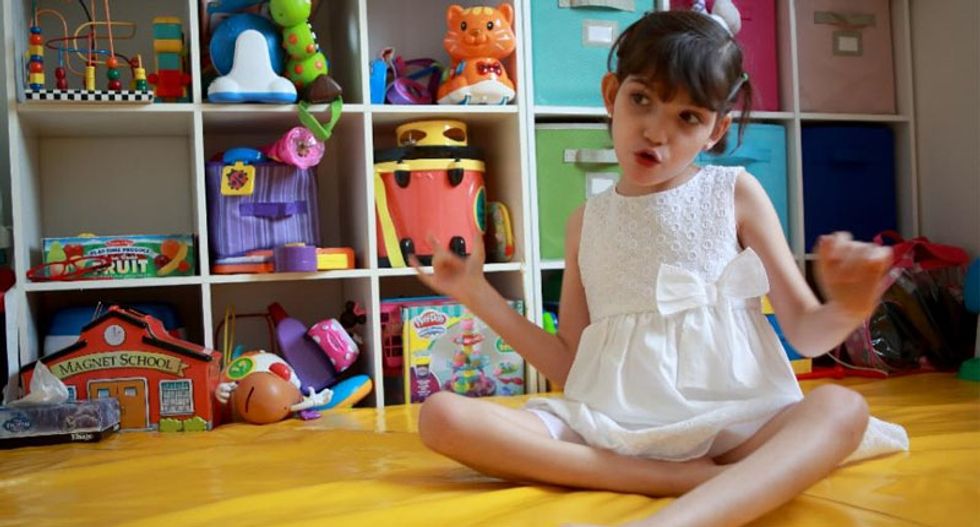 Grace Elizalde, who lives in the northern industrial hub of Monterrey, has a severe form of epilepsy known as the Lennox-Gastaut syndrome (AFP Photo/Carlos Ramirez)

An eight-year-old girl who endures 400 daily epileptic seizures will become Mexico's first authorized consumer of medical cannabis after the government granted her Tuesday an exemption to its marijuana ban.

The health ministry announced in a statement that it would facilitate the paperwork needed to import a cannabis oil that is believed to alleviate epileptic fits.

"We are happy," Raul Elizalde, the girl's father, told AFP by telephone after he met with the head of Cofepris, the health agency that oversees medicine imports. "It's our last hope."

"We want to reduce the number of convulsions from 400 per day to none. We hope that she could become more independent, that she could walk and speak and eat on her own," he said.

Graciela, who lives in the northern industrial hub of Monterrey, has a severe form of epilepsy known as Lennox-Gastaut syndrome.

The girl, whose parents call her Grace, has not spoken a word since saying "mommy" when she was under two years old. She wears diapers, crawls and moves in a pink wheelchair.

Her parents have tried a slew of treatments, including brain surgery, to ease their daughter's pain, but nothing has worked and her condition has worsened.

Out of other options, they asked the government's General Health Council for a special permit to import cannabidiol (CBD), but it was denied.

Last month, a judge gave her desperate parents permission to get the medicine even though Mexico, which is engulfed in a bloody drug war, opposes any legalization of narcotics.

Elizalde said the doctor must now write a prescription and they would then seek to import the drug from the United States or Norway.

The health ministry said it would allow Epidiolex, a drug produced by Britain's GW Pharmaceuticals, to be imported for Grace. The substance is still in the investigative phase of development.

"It must be clarified that this health authorization does not give the green light to import marijuana in any of its forms," the health ministry said.

The statement said Cofepris "took into consideration that this is a particular case because it has been resistant to all available treatments in Mexico, including surgery."

In April, GW Pharmaceuticals said physician reports found that the drug led to a 54 percent median reduction of seizures among 137 children and young adults who took it for 12 weeks at 11 US hospitals.

Elizalde said that while the ministry gave them an exemption, the court battle continues as the government has filed a petition to overturn the judge's decision.

President Enrique Pena Nieto, whose government is fighting drug cartels in a conflict that has left tens of thousands dead in less than a decade, opposes any legalization.

Yet, legalization is making some headway elsewhere in Latin America.

Uruguay has created a regulated market for pot while Chile's lower-chamber of congress backed legislation in July to legalize the cultivation of marijuana for recreational and medical use.

More than 20 US states have legalized medical marijuana.