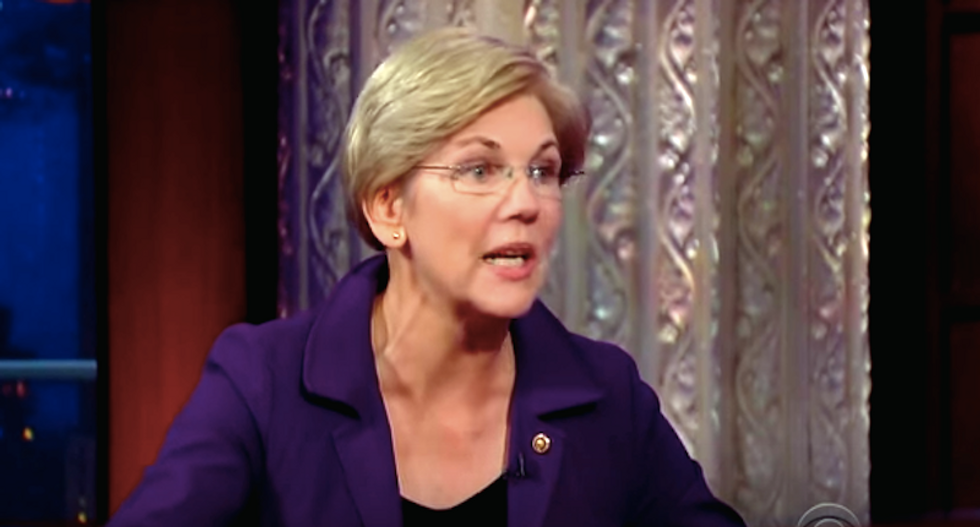 Sen. Elizabeth Warren (D-MA) has been asked perhaps hundreds of times whether she's running for president, but Stephen Colbert found a new angle on an old question.

"Are you sure you're not running for president?" Colbert asked. "Have you checked the newspapers lately? Because you might have done it in your sleep. These days, politicians actually have to check the opt-out button -- it's like unsubscribing from an email."

The Democratic senator assured the "Late Show" host she had not accidentally launched a White House bid, and Colbert asked her to tell voters why she would make a "terrible" presidential candidate.

"I'm out there every single day in the middle of a huge fight, and it's a fight about what this county is going to look like going forward," Warren said. "The game is rigged."

Colbert pressed her for details about the game.

Her remarks drew an enthusiastic response from the studio audience.

"Well, you don't sound like you're running for president, I'll tell you that," Colbert joked.

Republicans are standing by Rep. Elise Stefanik of New York who has received harsh criticism over the racist conspiracy theory that was allegedly cited by the gunman as motivation.

Kimberly Guilfoyle, the former advisor to President Donald Trump's failed re-election campaign who later become engaged to his eldest son, is hawking steaks for a meat delivery service whose Better Business Bureau (BBB) accreditation has been revoked. In online reviews, customers allege that the curated meat boxes from Good Ranchers, which may cost hundreds of dollars, are not only a "rip off" but also sometimes never arrive.

On May 15, Guilfoyle uploaded a video of herself standing over a smoking indoor grill, flipping thin cuts with little visible marbling over the flames. "I'm here with these beautiful steaks from goodranchers.com," she says. "And this is the way you show your family you love them — by buying this meat that is born and raised here in the United States."