Ellen Page tells Stephen Colbert she's 'grateful' to be out of the closet: 'It is not a nice place to be' 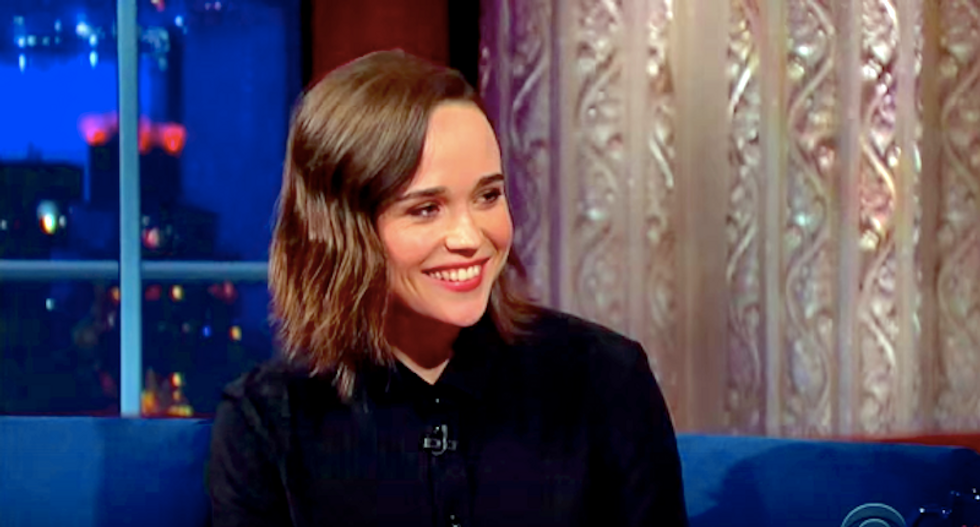 Ellen Page told Stephen Colbert she was "grateful" for the responsibility she feels to promote LGBT rights after she publicly revealed last year that she is a lesbian.

The actress appeared Tuesday on "The Late Show," where she discussed her new movie, "Freeheld" -- the true story of a lesbian couple's fight to receive the same benefits as other married couples -- and talked about her own experience since coming out.

"I feel so grateful to feel how I feel now, compared to how I felt as a closeted person," Page said. "It is not a nice place to be. I was sad, it is toxic and I wish that no one had to live that way."

Page grew emotional as she talked about how her experience, as a well-off white celebrity, might compare to other LGBT people who come out to family, friends and co-workers.

"I'm a very privileged person, I'm a very privileged gay person, and those who are affected the most in our community are the most vulnerable," she said. "I feel so grateful to be able to, you know, talk about things or share stories and meet incredibly inspiring people or have connections with people who've been touched by me coming out -- which is an incredible moment to get to have with a human being."

"Freeheld" takes place in 2006, when same-sex marriage was legal in only one state and expressly prohibited in 41 others, and Colbert asked what might have accelerated the acceptance of marriage equality in the years ahead of the U.S. Supreme Court ruling in Obergefell v. Hodges.

"I think, for the most part, LGBT people started to become more visible," Page said. "Tolerance is always correlated with less people being out of the closet. The more people started living their lives, the more we've had films about it and on television."