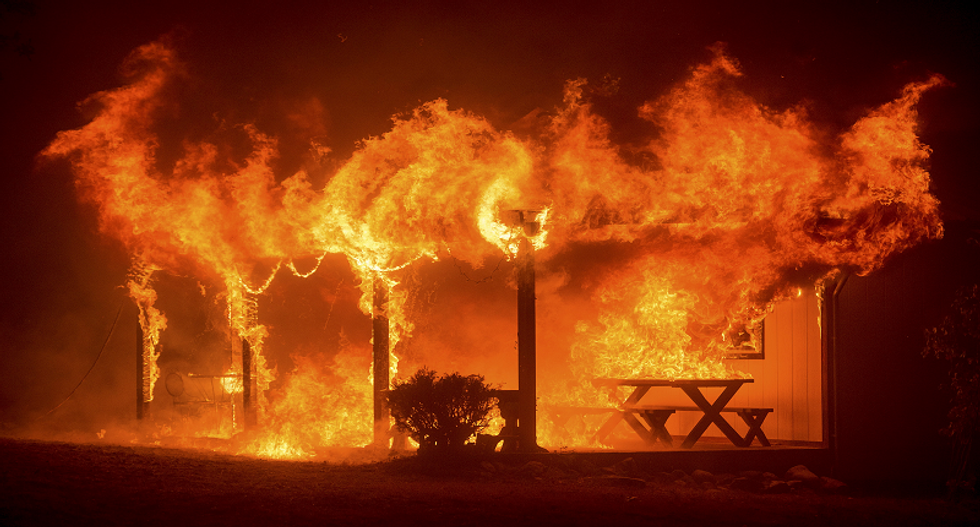 She said the fire grew overnight after officials initially overestimated the area of the blaze on Friday.

Tolmachoff said she expects the tally of destroyed homes to grow as inspectors assess the damage on Saturday. Residents in the area were required to evacuate on Friday.

"There are a lot of homes there, but they're spread pretty far and wide," she said.

About 3,300 firefighters are working to contain the fire, which erupted on Wednesday and spread late on Friday near the former gold mining town of Jackson. Officials listed it as 10 percent contained on Saturday morning.

Governor Jerry Brown on Friday declared a state of emergency for Amador and Calaveras counties.

Separately, authorities ordered the entire community of more than 2,700 residents to evacuate San Andreas on Friday, but lifted the order when flames headed away from town.

About 3,500 people have been affected by a mandatory evacuation in the area. He said if the fire reaches the containment line and spreads North, more evacuations will be triggered.

"This fire has all the right conditions for it to be making this type of large acreage gain," Schwarber said.

He said low humidity, steep terrain and upslope wind have made the blaze harder to control.

The fire was in the northern part of a famed grove of giant sequoia trees in Kings Canyon National Park on Saturday, but Schwarber said the giant sequoias were less of a concern because they are naturally flame-resistant and more protected.

More than 2,500 firefighters were on the front lines of the blaze on Saturday, and containment was listed at 29 percent.

Ranking as California's largest active fire, the Rough has scorched about 128,800 acres (52,000 hectares) and forced evacuations of park staff and visitors from a large swath of Kings Canyon.