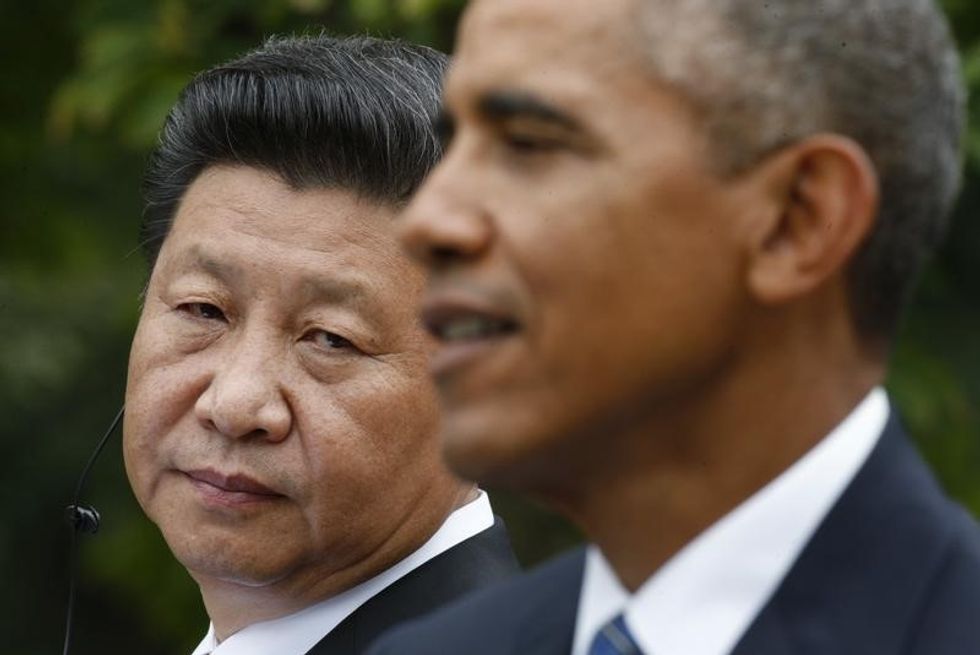 On Friday morning, Chinese President Xi Jinping enjoyed the symbolic high point of his first state visit to the United States - a 21-gun salute as he stood with President Barack Obama outside the White House.

For most Americans, it was a sideshow: the main news networks were deep into their fourth straight day of blanket coverage of Pope Francis' historic U.S. visit.

Xi's U.S. trip has - at least in terms of U.S. media coverage - been firmly overshadowed by the wildly popular pontiff, raising questions over its timing and contrasting sharply with the wall-to-wall coverage of Xi by Chinese media.

China's tightly controlled state media has focused heavily on the pomp, ceremony and shows of respect Xi has been treated to in Seattle and then Washington.

The adoring domestic coverage is important for Xi, who is grappling with Chinese market instability and a flagging economy at a time when he is seeking to consolidate his grip on the leadership ahead of a crucial Communist Party congress in 2017.

On a visit to a high school in Tacoma, near Seattle, where Xi and his singer wife Peng Liyuan were serenaded by the school choir, state television showed children screaming their appreciation. A day earlier, Xi had quoted Martin Luther King and sprinkled references to U.S. pop culture into his speech to tech executives.

China has also stressed Xi's personal connection to the United States, with the Xinhua news agency carrying a video on its Facebook page - not mentioning that Facebook is blocked in China - showing him putting on a friendly face for Americans.

"From Iowa visitor to White House guest," the English-language video explains, referring to a brief 1985 visit when Xi was an animal-feed official in Hebei, Iowa's sister province.

The pope's visit to the United States, by contrast, has barely featured in the Chinese media. The Vatican has had no formal diplomatic ties to Beijing since shortly after the Communist Party took power in 1949.

Francis, the most socially progressive pope in generations, has drawn large crowds and the kind of welcome normally reserved for rock stars during his first U.S. visit, which ends in Philadelphia on Sunday. U.S. live news networks have hung on his every word and step.

Talk of the pope dwarfed any attention given Xi's visit, according to data provided by MediaMiser, which tracks news and media content online, on television and radio.

From Aug. 26 to Sept. 25, tweets in the United States about Francis topped 765,000, compared to 107,000 for Xi, according to MediaMiser. Online articles from Sept. 20-24 mentioned the pope nearly four times more than Xi. On television, the pope was mentioned over 25 times more.

Xi's mostly buttoned-down interactions with tech executives also contrasted with those of Indian Prime Minister Narendra Modi, who displayed an emotional side on Sunday in a town hall forum with Facebook CEO Mark Zuckerberg. Modi's voice broke as he described his humble beginnings.

As relations with China become tenser for many tech companies due to cyber-hacking and market access issues, Modi's visit has highlighted the huge potential the technology industry sees in India.

Francis flew out of Washington, heading to a rapturous reception in New York and a star turn at the United Nations General Assembly, just as Xi was arriving.

Under Xi, U.S.-Chinese relations are at a low, hurt by tensions over cyber theft and China's assertive moves in Asian maritime disputes.

"To be contrasted with someone who has no military, no economic might and be completely eclipsed, I think it’s astounding. I don’t think the Chinese are noticing the contrast in messages,” said Jorge Guajardo, the former Mexican ambassador to China from 2007 to 2013 who lives in Washington.

Chinese officials played down any suggestion that the pope's visit had eclipsed Xi.

"The pope's visit, we noticed that and that ... he is welcomed by the public. His visit has his own bearing here. President Xi's visit has its own bearing," said Chinese delegation spokesman Lu Kang.

Xi slid further down the U.S. news agenda on Friday morning, when Republican House of Representative Speaker John Boehner announced his resignation. The big networks quickly cut off Xi speaking at a news conference with Obama to follow a briefing by Boehner.

Chinese officials have kept security around Xi's visit particularly tight, limiting his ability to go off script and interact with the public. He left his wife Peng to fill that role in Washington, where she accompanied First Lady Michelle Obama to name a new-born panda at the Smithsonian National Zoo.

Officials in Tacoma said the security preparations had been grueling.

"We met with advance teams six or eight times over the summer," Tacoma Mayor Marilyn Strickland said of Xi's visit to the high school.

Ming Xia, a political science professor at New York's City University who traveled to take part in an anti-Xi protest outside the White House, said the pope's humility during his visit had highlighted what he called Xi's arrogance.

"The pope was praying with the homeless and said we are all equal in the eyes of God, the real father. Xi thinks he's the father of the Chinese people - he has assumed the power of God."