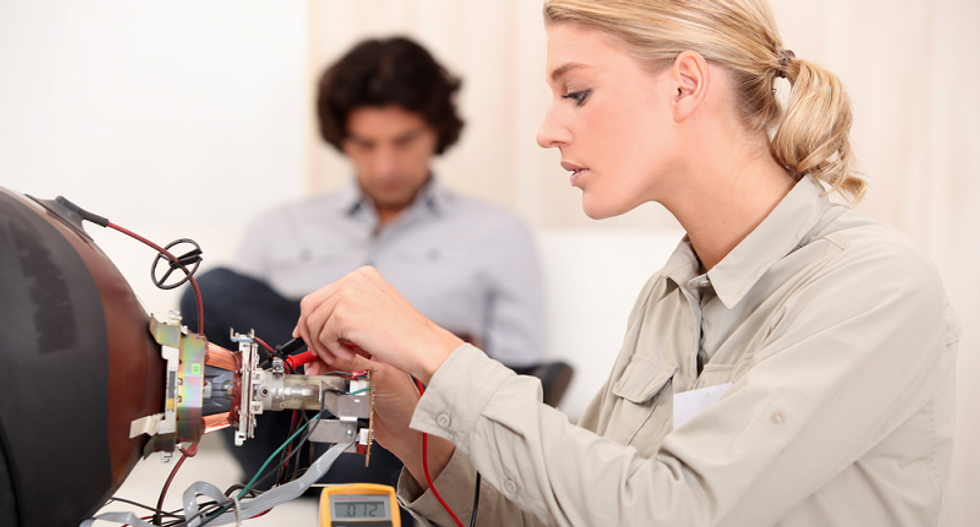 Britain desperately needs to persuade hundreds of thousands of women to take up engineering to help the country exploit new technologies that could transform our lives. Failure would damage the na tion’s capacity to meet the challenges of the future, the new president of the Institution of Engineering and Technology (IET) , Naomi Climer, warned last week.

Climer, the first female president of the IET, the world’s largest engineering institution, told the Observer that Britain was facing a serious shortfall in engineers. Figures suggest that the country will need to recruit almost two million over the coming decade, she said. Advances in robotics, software design, renewable energy, materials and many other fields now offer to bring major improvements to Britain – but will need the problem-solving skills of engineers to make the best use of them. However, at the same time the nation is facing a serious shortfall in numbers entering the profession.

“In the past, most professions – including medicine and engineering – were predominately male domains,” said Climer. “Today many have been transformed and employ large numbers of women. For example, jobs in medicine are now divided fairly evenly between the sexes. By contrast, engineering has remained stubbornly stuck in the past. Men still hold down 94% of jobs . That is simply not acceptable. Indeed, it is harmful. We cannot hope to recruit the numbers of engineers we need in the near future if we are effectively excluding half the population from taking part.”

Climer – the former head of Sony’s Media Cloud Services – said parents and teachers were still discouraging children from considering professions in engineering by depicting it as drab or dirty. “What so many young people don’t realise is that engineering will give you work wherever you want: in the office or out of doors; on your own or as part of a team; working with computers or without them. You could work with food, chemicals, machines, electronics, bridges or railways or design software. It is an amazing range. Young people need to be made aware of that.”

Climer qualified with a degree in chemistry from Imperial College London, but became an engineer in 1987 because the BBC was encouraging women to join the profession. In 2000 she moved to ITVdigital as director of technical operations before moving to Sony Europe in 2002.

The crucial point, added Climer, is that new technology is now offering society a chance to adopt all sorts of devices that could transform lives: apps that could help visually handicapped people make use of public transplant or robots that could help the elderly and the infirm, for example.

“Many of these innovations could be of great help to society and women are particularly good at thinking about the needs of others, so they will bring a very valuable dimension to the field.

“In any case, the more mixed is the membership of any team – whether that is in terms of gender or age or class – the better it is at coming up with solutions to problems, and engineers are by definition problem-solvers. So again it makes it important to get as many women involved as possible.”

How Britain can encourage more women to become engineers is not a straightforward business, she said. “There is no single solution. However, for a start, we need to make it clear just how widespread the problem is: major companies should publish precise figures about the exact proportion of women they have in their workforces. That might at least getting them thinking about where they are going wrong.”