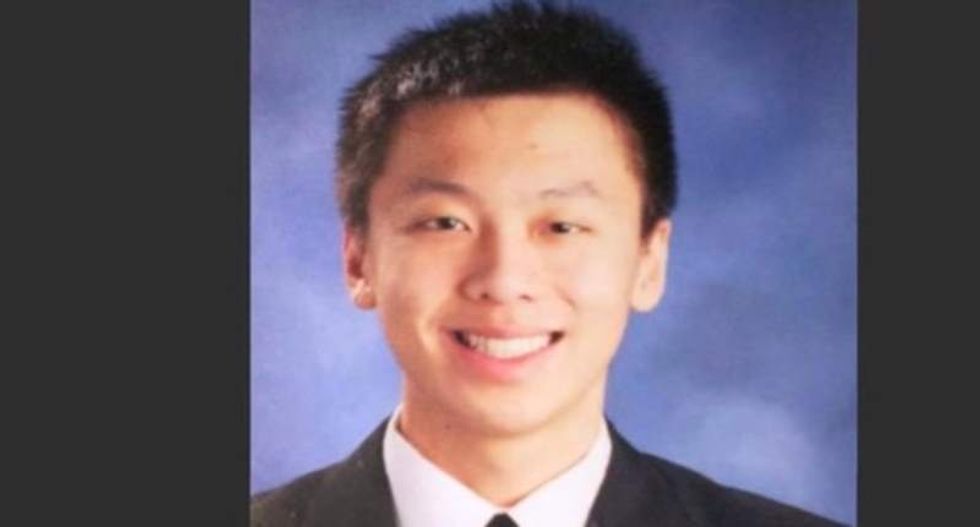 Five people were charged in the 2013 death of a freshman at New York City's Baruch College during a hazing ritual, police in Pennsylvania said on Tuesday, the first of 37 people that prosecutors may charge in the fatal incident.

Members of the college's Pi Delta Psi fraternity brutally assaulted Chun "Michael" Deng, 19, during an initiation rite in Tunkhannock Township, northern Pennsylvania, in September 2013 and delayed taking him to the hospital, contributing to his death, police said.

A grand jury had recommended that prosecutors bring a variety of criminal charges, including third-degree murder, involuntary manslaughter and aggravated assault, against 37 people and the fraternity's national organization, police said on Monday.

During a ritual called "the glass ceiling," Deng was forced to walk blindfolded, carrying a 30-pound backpack, through a line of fraternity members, who shoved him and threw him to the ground, according to police.

Deng complained about his head hurting but continued and was eventually knocked unconscious. He was transported to a hospital an hour later with a significant brain injury, police said.

Before taking him to the hospital, fraternity members contacted Andy Meng, the fraternity's national president, who encouraged the group to hide fraternity items, police said.

The grand jury recommended that Meng be charged with hindering apprehension, hazing and criminal conspiracy. His attorney could be immediately identified.

"We want to hold not only the individuals involved, but if there's an organization that sanctioned it, whether officially or unofficially, we're going to hold them accountable as well," Wagner said at a news conference Tuesday.

"Too many families have been devastated as a result of fraternity hazing," Douglas Fierberg, an attorney representing Deng's family, said in a statement.

He said the family will continue to pursue its wrongful death lawsuit against the fraternity.

Baruch College, part of the City University of New York, enrolls about 15,000 students, about 100 of whom are involved in Greek organizations, a spokeswoman for the college said.

Pi Delta Psi, which has members at 25 colleges across the country, was permanently banned from Baruch in 2014, and pledging activities were suspended for all Greek organizations, she said in a statement.