Fox host offers 'semi-apology' for trashing pope on climate change, then rips him for ignoring abortion 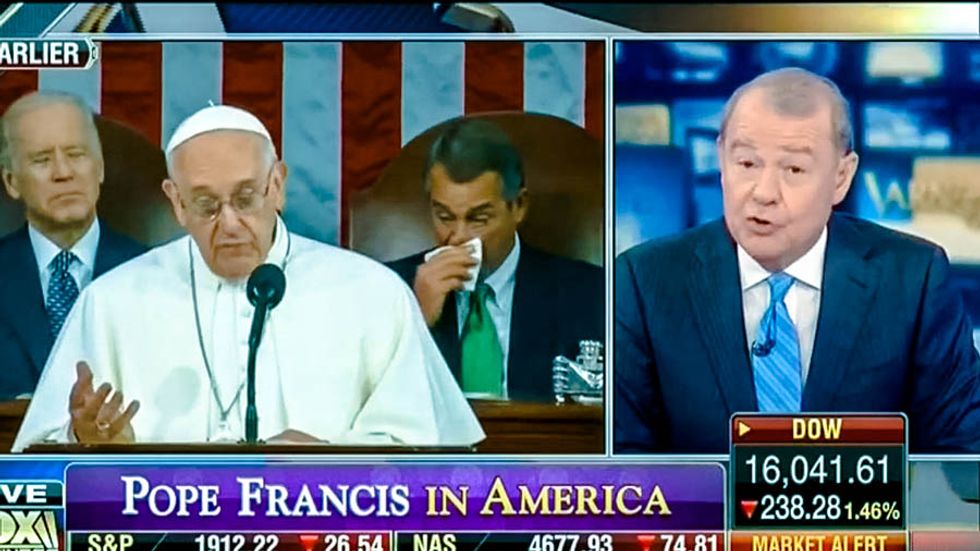 Fox Business host Stuart Varney said on Wednesday that he was offering a "semi-apology" to Pope Francis after lashing out at him for addressing climate change. However, Varney complained that the pope "missed an opportunity" to condemn abortion rights.

After the pope spoke at the White House on Tuesday about the need for tackling global warming, Varney spent nearly the next 20 minutes blasting the remarks.

“I don’t think either of us was expecting to respond to a papal speech dealing with climate change,” Varney complained at the time. “I’ve got to repeat, I was shocked at how much time the pope spent on climate change! And how he walked right into the politics of climate change!”

Following the papal address to Congress on Wednesday, Varney suggested that he regretted his earlier rant.

"I think that today's presentation was very different from what we saw yesterday when the Holy Father was arriving at the White House," Varney told Father Jonathan Morris. "Today, I don't think he was political. I think he addressed Congress in terms of Christian principle and not political policy."

"This is my way of offering a sort of semi-apology," the Fox host continued. "We went at it yesterday about the politics of the papacy presentation yesterday."

Morris joked that the "softening of Stuart Varney" was Pope Francis' "first miracle."

But Varney did offer some criticism of the pope's address to Congress.

"I would say so," Morris agreed. "I think a lot of Catholics and Christians and pro-life people in the United States of America wished he had said that."

Watch the video below from Fox Business News, broadcast Sept. 24, 2015.