Fox News host: 'Everyone benefited' from putting more blacks in prison for drugs in the 1990s 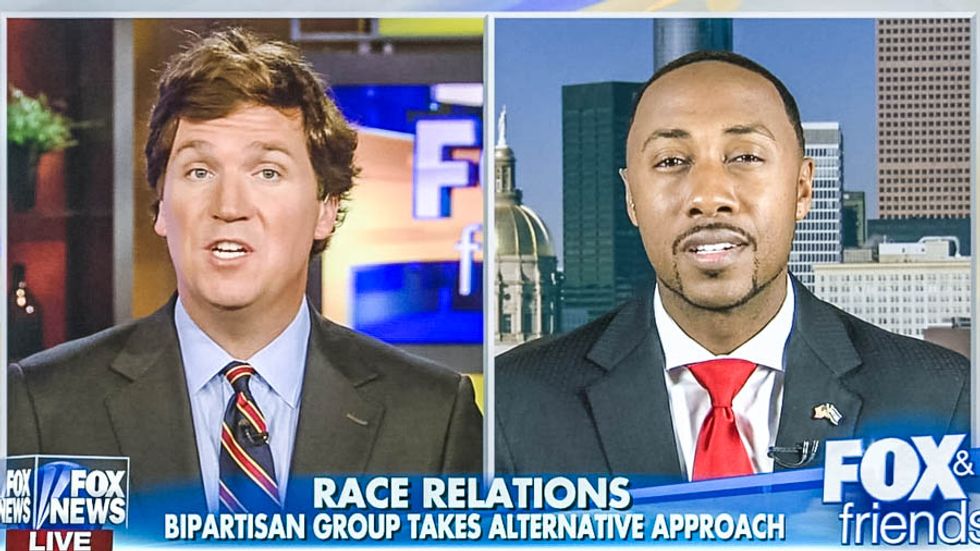 Fox News host Tucker Carlson argued over the weekend that "everyone benefited" after the incarceration rate for non-violent drug crimes increased in the 1990s.

On Sunday's edition of Fox & Friends, Carlson opined that CBS host Stephen Colbert was "raising eyebrows" because he was seen wearing a Black Lives Matter wristband.

"Was his show the right outlet for this message?" the Fox News host said. "I assume he doesn't fully understand what Black Lives Matter is -- maybe he does."

Ashley Bell, whose 20/20 group bills itself as an alternative to Black Lives Matter, argued that activists should be partnering with police if they wanted to see change.

"You've got to have police officers at the table, you've got to have prosecutors, criminal justice experts," Bell explained. "Which is why the first thing 20/20 did is partner with the National Association of Black Police Officers so we can have a real discussion."

Bell added that his goal was to educate presidential candidates on the need to reduce the sentences of non-violent offenders.

"Well, I think there is wide consensus that the Clinton administration went a little overboard in the sentencing, for sure," Carlson agreed. "On the other hand, the crime rate went way down. And everyone benefited from that, particularly in black neighborhoods, which always have the highest crime rates."

"That was good for people who live in those neighborhoods and every neighborhood," he continued. "So you kind of have to balance those two imperatives."

"These issues are a little bit broader than that, Tucker," Bell replied. "When you talk about folks who have felonies who were convicted 10, 20 years ago of non-violent felonies who live in states like Georgia with a great Republican governor who is bringing jobs to our state, they can't sign up for those jobs because they have felonies that are decades old that have nothing to do with the jobs they are trying to apply for."

"The crime rate, again, is ticking up," Carlson insisted. "It's not one man's imagination. The numbers are there. The murder rate, armed robbery, rape -- those numbers are all up in major cities across the country."

In fact, the FBI announced in 2014 that the violent crime rate in the United States had dropped to the lowest level since 1978.

A report from the Brennan Center for Justice at NYU School of Law found that the drop in violent crime rates had little to do with increased incarceration rates.