From solar to sudsy, pope souvenirs run the gamut in Philadelphia 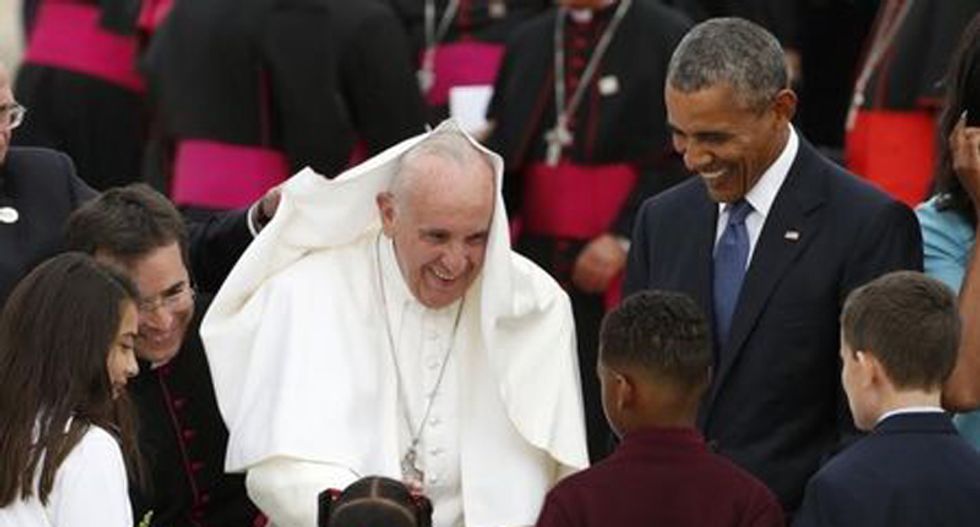 Pope Francis greets children upon his arrival as he is welcomed by U.S. President Obama at Joint Base Andrews outside Washington

Some are sun-powered, some are sudsy and others are simply soap.

A smorgasbord of Pope Francis memorabilia peddled by shops around Philadelphia run from solar-activated pope dolls and soap bars with the pontiff’s face printed onto them to papal beer with Francis coasters to boot.

The pope was scheduled to end his six-day tour of the United States with a stop in the city on Saturday and Sunday, concluding his visit with a public mass expected to draw more than one million worshipers.

Francis' appearance and a four-day World Meeting of Families summit starting on Tuesday organized by the Roman Catholic church at the Pennsylvania Convention Center could bring a $500 million boost to the area's economy, conference officials said.

As the pope's arrival in Philadelphia approaches, shop owners are boosting their own economic growth with sales of pontiff-fashioned merchandise.

Open House, a gift boutique near the convention center, has sold hundreds of plushy pope dolls and Pope Francis figurines that wave when sunlight hits their hidden solar panels, said manager Sonia Skooglund, who said she was fondest of the plushies.

"They just look the most like him," she said. Wholesalers have approached the store, which carried pope bobbleheads that have already sold out, with items including pope-themed caramel corn.

Nearby, Rob Evangelista sold handmade soap bars with Francis' face printed onto them at his family's bath product shop, Duross and Langel. Alongside are Catholic-inspired soaps with images of the Virgin Mary and the Holy Family, but the ivory-colored pope soaps are tops.

"They have been the hot ticket," Evangelista said. He said part of pope soap sale proceeds would go to the city's Catholic social services.

Outside of trinkets and beauty bars, a growing selection of edible pope souvenirs are popping up on bakery counters and drink menus around Philadelphia.

Joe Martella, who owns Potito's cafe and bakery, said his sprinkled cupcakes with photographic images of the pope's smiling face on top have been big sellers.

He expects a new batch of cream-filled zeppole, a fried donut fritter typically served by Italians on Easter, in the shape of a cross and with the pope's face emblazoned on them to go faster.

"Those crosses are going to sell like crazy," Martella said.

Across town, Italian bakery and deli Pastificio had pope cheese - molds of Francis adorned in his ceremonial headdress and carrying a pastoral staff made out of mozzarella.

Pope drinks abound, but no bar seemed more obviously pope-focused than one called Pub on Passyunk East, which also goes by the acronym "P.O.P.E." It serves beer dubbed "Holy Wooder" on coasters with pictures a waving Francis.

A group of Catholics from Mexico attending the family summit snapped photos of rows of dozens of waving pope dolls lined in a storefront window, beckoning them to shop, which they did not.

Group member Susanna Margarita said the display was fun but mainly a distraction. "To see the pope is what's important and to listen to his message."