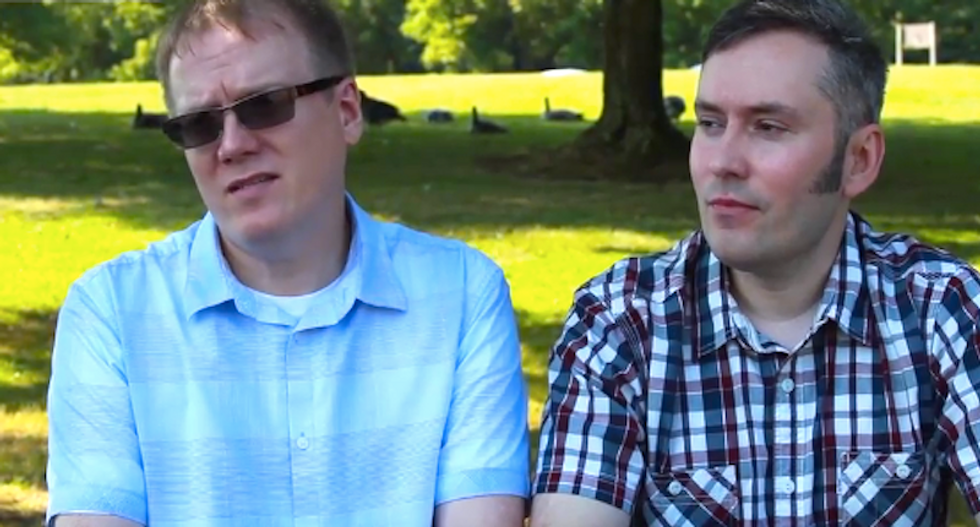 A gay Kentucky couple said they never thought it would be legal for them to marry -- but once the U.S. Supreme Court recognized that right, Kim Davis "tainted forever" what they had hoped would be a special memory.

David Moore and David Ermold, who have been together for 17 years, joined a discrimination lawsuit against the Rowan County clerk after she denied them a marriage license in July, about two weeks after the ruling in Obergefell v. Hodges essentially legalized marriage equality.

The 49-year-old Davis was held in contempt of court and jailed for five days for refusing to comply with court orders and issue marriage licenses, which Moore and Ermold said was unfortunate -- but they have no regrets.

"I hate to say it, but our marriage license put someone in jail – that's what it cost," Ermold told the Daily Mail. "The cost here is great, and it's larger than anyone could possibly imagine."

Ermold and Moore sought advice from a pastor about overcoming their hurt while standing at the altar, but they realize Davis has thrust herself uninvited into their wedding.

"It's never going to be a good memory," Moore said. "The entire experience is this tainted thing now. Even when we have our ceremony, people are going to ask us about it, they are going to say Kim Davis' name."

The marriage license they obtained Friday from a deputy clerk does not list Davis' name, and the county clerk's attorney said those certificates were "not worth the paper they were printed on."

Ermold, a 41-year-old English professor at the University of Pikeville, and Moore, a 39-year-old graphic designer at Morehead State University, said the Liberty Counsel attorney's comments were "fraudulent and derogatory."

"They need to stop attacking gay people," Moore said. "She hasn't endorsed anything, she hasn't participated in anything. Her deputy clerk issued that license."

Davis and another Kentucky clerk have suggested that LGBT couples could travel a half hour or so to another county to obtain marriage licenses, but Moore and Ermold said they felt validated obtaining a license in the county where they've lived for more than a decade.

"I didn't want to go to another county – this is my county," Moore said. "Telling us to go somewhere else, it's saying, 'Leave us alone, we don't want you here.' It's like before civil rights when African-Americans were told to use another bathroom or asked to leave restaurants because no one would serve them."

The couple said they did not want to see Davis jailed, and hoped she would instead resign her taxpayer-funded position if her duties conflicted with her beliefs.

"I don't think she's a martyr," Moore said. "She was not in jail because she's a poor Christian lady, but because she was in contempt in court. She didn't have to go to jail -- she chose to go. The judge is giving her these chances and now she's getting her freedom back. The easiest thing would be if she went back to work and didn't have problem with doing marriage licenses. She has to just do her job or she should step aside."

Moore and Ermold said they believe Davis is sincere in her religious beliefs, but they can't help but feel she's being manipulated by politicians like Mike Huckabee and her religious conservative attorneys.

"I feel like she's being taken advantage of by those other forces greater than us that are in politics, and kind of using her," Moore said. "I don't like that because she is from our community -- and she's a person."

The couple have 30 days to marry before their license expires, and they're looking forward to sharing their wedding with supporters.

"We never thought we would have a big celebration, but our friends and family who have been through all of this, we want to give them closure -- and they deserve it," Moore said. "Whether we have a ceremony or not, we feel good about what we did and who we are."

Watch an interview with Moore and Ermold posted online by the Daily Mail: