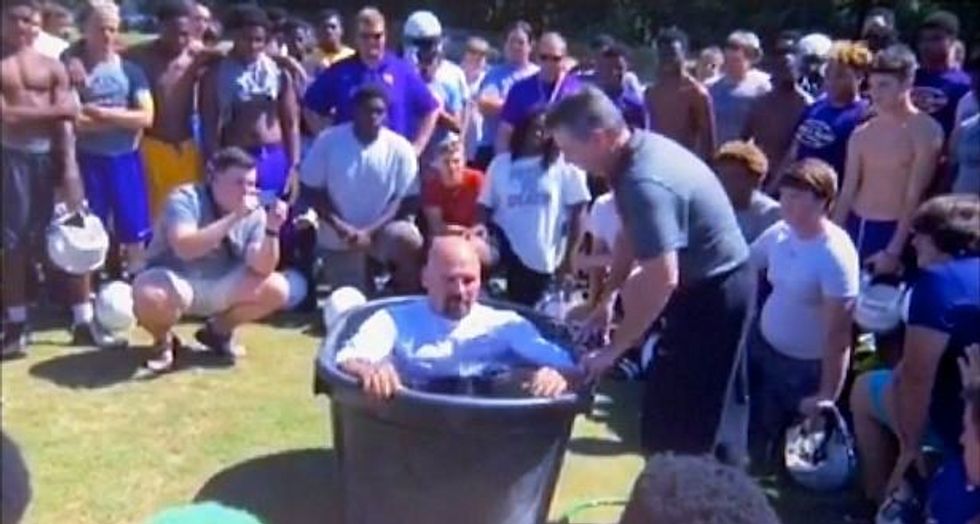 A Georgia high school violated local public school district policy by allowing a mass baptism of members of its football team on the school's field in an event criticized by a group advocating for the separation of church and state, officials said.

A pastor dunked 18 Villa Rica High School players and one coach into a tub of water on the school's field in a Christian baptism ceremony before an August football team practice.

"We are pleased that the school district has publicly affirmed its commitment to keep religion out of public school events, and concurs that the bizarre baptisms crossed the line," Annie Laurie Gaylor, co-president of the advocacy group Freedom From Religion Foundation, said in a statement on Tuesday.

The group noted that a coach had invited Pastor Kevin Williams of First Baptist Church of Villa Rica to perform the mass baptism.

A videotape of the event was posted online. The school is located in conservative Villa Rica, Georgia, about 30 miles west of Atlanta.

The foundation complained to the Carroll County School District, calling the baptism a violation of the separation of church and state enshrined in the U.S. Constitution's First Amendment.

Carroll County schools assistant superintendent Terry Jones said in a statement on Monday that the baptisms violated school district policy and that the district did not know the ceremony was scheduled to be held at the high school.

"We would hope that the staff members who participated would be reprimanded and carefully monitored in the future, and that the district would send out a memo reminding district employees that they may not engage in devotional events with students in our public schools," Gaylor said.

She called the baptisms "one of the most egregious entanglements of church and state that we've seen."

Williams did not immediately respond to a request for comment. Williams told the Atlanta Journal-Constitution newspaper that he had checked the school's rules and thought there was no prohibition on baptisms as long as it was not school-sanctioned or held during school hours and no students were compelled to join in.