German automakers take on Tesla in race of electric cars 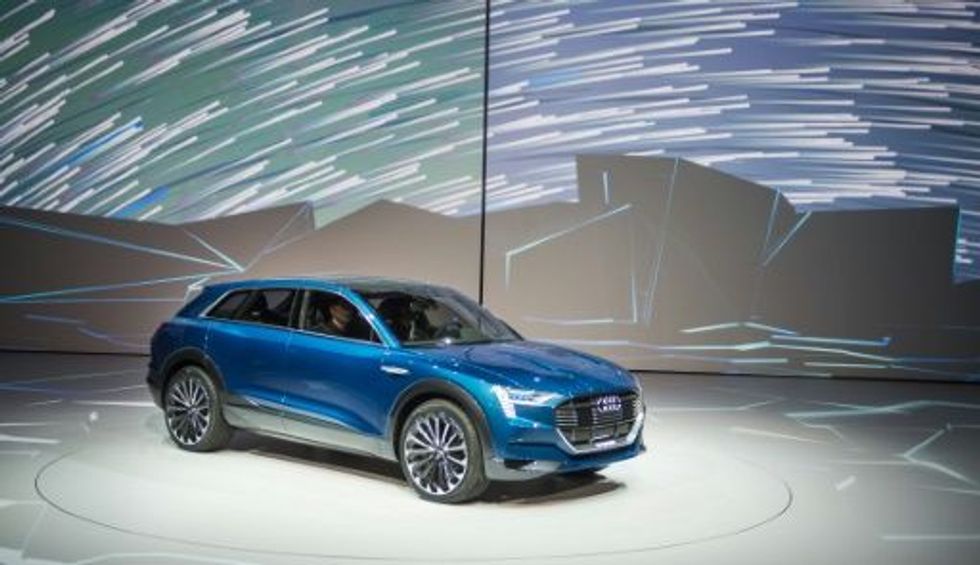 Germany's mighty auto industry is stepping on the accelerator so it won't be left behind by a US upstart racing ahead in the market for luxury electric cars.

California-based start-up Tesla, a star on Wall Street, currently has no rival at the high end of the electric car segment, according to Francois Jaumain, auto expert at PwC.

Tesla sells the Model S four-door sedan, but is scheduled to release a long-awaited and heavily pre-sold Model X, a new gull-wing-door, all-electric SUV, at the end of the month.

But Tesla wants to broaden its appeal and founder Elon Musk has promised a cheaper "Model 3", costing around $35,000 in two years' time.

Electric cars are still very much a niche market, both in the United States and Europe, where they accounted for barely one percent of sales in the first six months of 2015.

But with double- and even triple-digit growth seen in some countries, German carmakers are gunning for a piece of the action and are not going to give in to being beaten by Tesla.

At the IAA motor show in Frankfurt this week, Audi (Other OTC: AUDVF - news) , the luxury brand belonging to Volkswagen (Other OTC: VLKAF - news) , is scheduled to unveil its new "e-tron quattro" concept car, an urban 4x4 that could go into production in 2018 under the name Q6.

Porsche, also part of the Volkswagen Group, will also show off an electric concept car, the "Mission E".

Already known as the "Tesla killer" in the specialised press, the Audi model is expected to have a range of around 500 kilometres (300 miles).

Audi "clearly wants to show that they're not going to let Tesla trample all over them," said Jaumain at PwC.

In fact, Audi will unveil its model just before Tesla launches a new crossover Model X, which will not be on display in Frankfurt.

After a roadster in 2008 and Model S in 2012, the Model X is Tesla's third car. Last week a high-performance version of the Model S, the P85D, earned the best marks ever given a car by the independent Consumer Reports group.

The US firm is convinced that demand for its future more affordable Model 3 will be sustainable and is building a new multi-billion-dollar "Gigafactory" in Nevada to produce the batteries for it.

Musk also predicted that Tesla would start turning in a profit in five years, after burning through $1.0 billion in the first half.

Tesla shares are investor darlings on Wall Street and its share price has soared eightfold since the start of 2013, currently valuing the company at more than $30 billion.

But there are also sceptical voices.

"Tesla is as insanely overvalued as any Internet stock in the late 1990s," before the bubble burst, warned Joe Nocera in a New York Times op-ed at the end of August.

"Without subsidy and without constraints, as long as the product isn't competitive, I don't see the market exploding," Lacroix (Paris: FR0000066607 - news) added about its growth prospects.

Daimler's Mercedes brand is also prepared to throw down the gauntlet to Tesla.

Its R&D chief Thomas Weber recently told the specialist magazine Auto Motor und Sport that Mercedes was working "on an intelligent concept for an extremely attractive electric car, with a range of 400-500 kilometres".

And rival BMW also seems to want to expand its electric models after the i8 and i3.

So, is Tesla's heyday already over?

Tesla's "rivals have production capacity that allows them to build cars at more competitive costs".

Audi could "have an electric Q6 alongside a hybrid Q6 and a diesel Q6. All parts would be amortised across the whole line, aside from the powertrain," said Laurent Petizon at AlixPartners.