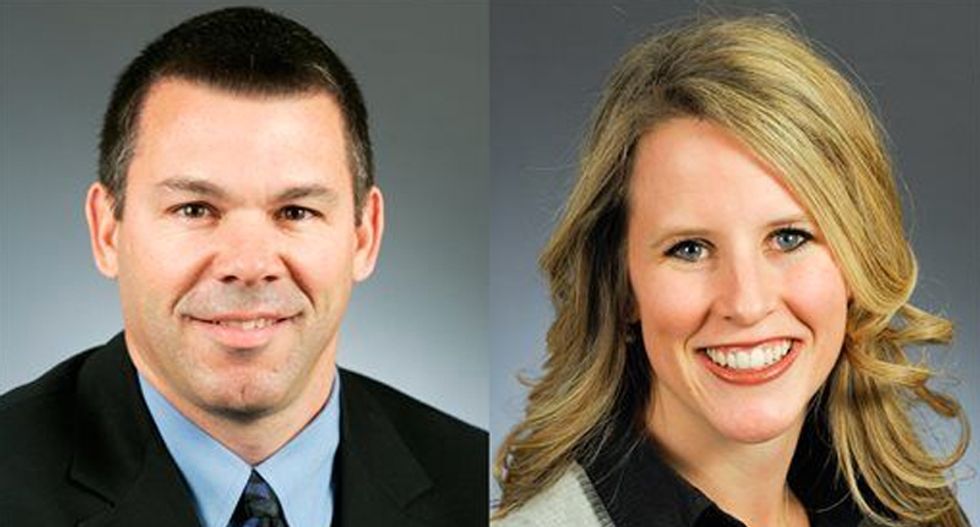 Two more married midwestern Republicans have apologized for sneaking around behind their spouses' backs and having a fling, with both lawmakers being forced to step down from spots on the Ethics Committee, according to the Killeeen Daily Herald.

Minnesota State Reps. Tara Mack and Tim Kelly apologized to "law enforcement" but not the park ranger they claimed lied about them making out in a car in Lebanon Hills Regional Park, where Kelly was discovered with his pants unzipped and pulled down three weeks ago.

Initially, the two asserted they met to swap documents -- and not spit -- relating to a health insurance company at the park and vowed to lodge a formal complaint against the ranger.

“Last week, I received a citation for a nuisance. Subsequently, I have been told the officer wrote in his notes — information that I’ve requested, but has not yet been made public to me — statements that are completely false and inappropriate (and apparently were obtained illegally). I will be filing a complaint with the sheriff’s office regarding the officer’s egregious and false statements," Mack said in a statement.

According to Sheriff Tim Leslie, Mack -- a mother of two who is married to a minister -- was going to go forward with her complaint but “changed her tune” after learning the “salacious” details were going public.

The two conservative lawmakers have now admitted they falsely accused the ranger of lying.

While not specifically addressing what was going on in the car, Mack issued a statement saying: “I understand that the Park Ranger was trying to do his job. I have the utmost respect for the work law enforcement does to keep Minnesotans safe and I apologize for offending these great men and women.”

In his statement, Kelly also expressed regret to law enforcement without copping to the tryst.

"After serious reflection on the last two weeks, I can say that I am disappointed in myself for the way I handled my disagreement with a park ranger," said Kelly, a Catholic father of four. "I apologize to my constituents, to the law enforcement community and to the state of Minnesota."

Notable in both statements was the lack of a specific apology to the unnamed park ranger.

Mack and Kelly's fling comes on the heels of two other GOP state lawmakers, Todd Courser and Cindy Gamrat, exiting the Michigan state legislature after their affair was uncovered under slightly more bizarre circumstances.