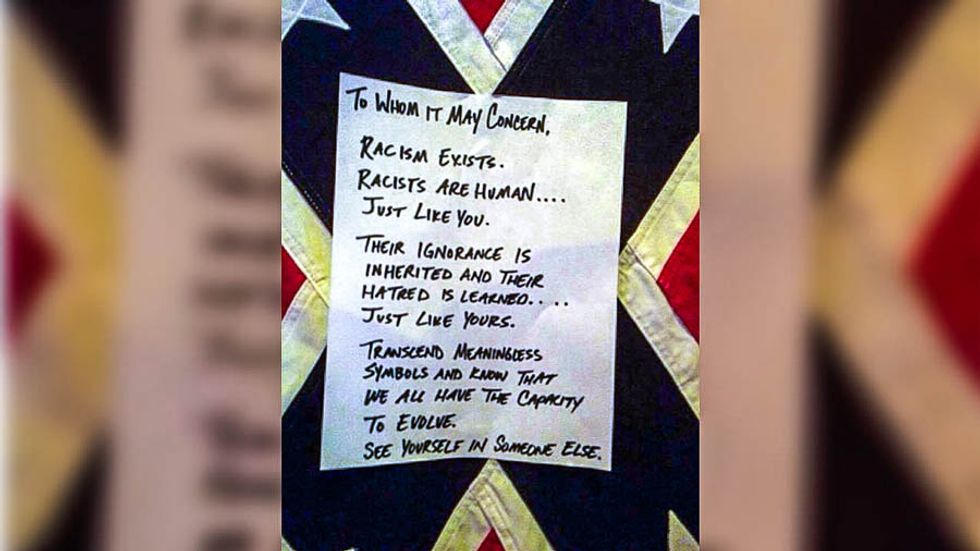 Austin folk-rock band Uncle Lucius asked Confederate flag supporters to "evolve" after discovering that the divisive symbol had been placed on a stage in Charlotte, NC where they were scheduled to perform.

In a note on Facebook, band members said that they showed up at Puckett’s Farm Equipment to perform on Sunday and found a large Confederate flag hanging on the back wall of the stage.

Drummer Josh Greco told Austin 360 that the band covered the flag with a black sheet during the performance. Before leaving, the band taped a note to the flag, which they called an "open letter to humanity."

"To Whom It May Concern," the letter began. "Racism exists. Racists are human... Just like you. Their ignorance is inherited and their hatred is learned... Just like yours."

"Transcend meaningless symbols and know that we all have the capacity to evolve," the band added. "See yourself in someone else."

Greco explained that the letter "seemed like the right thing to do."

“Rather than deny and avoid the elephant in the room, we decided to take the opportunity to make the best out of the situation. We are out here every night because we believe in the power of music to bring people together," he said.

Greco pointed out that the band focused on a “message of oneness and empathy" and that the "letter was not out of character for us."

The drummer added that the performance was probably the last time fans would see Uncle Lucius at Puckett’s Farm Equipment.

“We covered the 5’x8' flag with a black sheet during our set and made sure the fans in attendance got their money’s worth," he remarked. "We will most likely play Charlotte in the future, but it will be at a different venue."