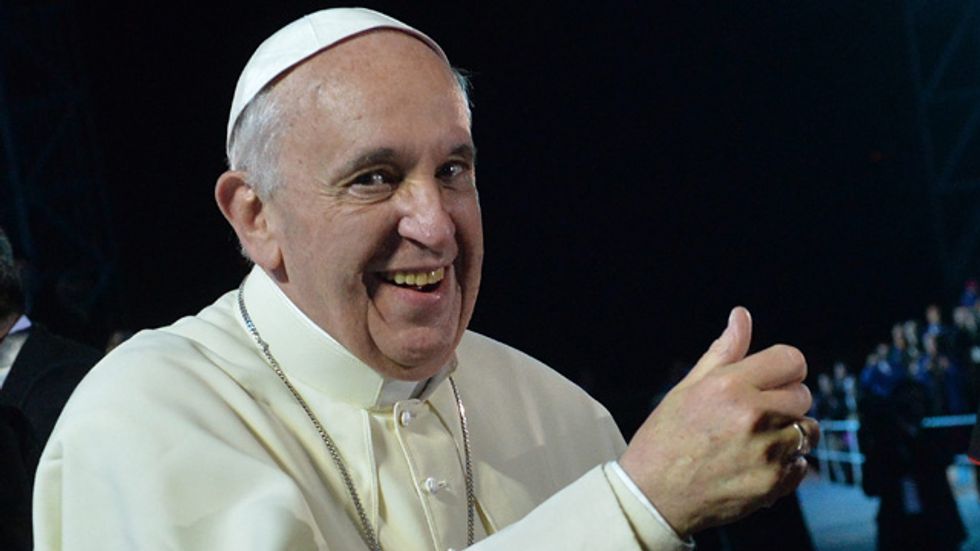 Congressional Republicans invited Pope Benedict XVI to address Congress awhile ago. Boy, do they wish they could rescind that invitation now that the much more progressive Pope Francis is gearing up to come to Washington on September 24.

The people’s pope has been on a tear lately, one week suggesting that women who have had abortions might be forgiven, the next week saying there might be room in the church for divorced people, and fast-tracking the annulment process.

All this forgiveness seems downright un-Christian to the conservative right, both here, and Vatican observers say, within the church hierarchy where a culture war and conservative backlash is brewing. What has conservatives in such a tizzy? The pope had already implied that atheists who live a moral life might find a way into heaven, and declined to pass judgment on gay people (literally, he said, "Who am I to judge?"). This forgiving, inclusive and compassionate church is not the one conservatives signed up for.

Let’s review some of the more “radical” things the progressive pontiff has said and done just in the last few months that have set the right-wing’s blood boiling anew.

1. Pope Francis said it is our moral duty to address climate change.

The pope’s encyclical on climate change in June was a groundbreaking document and the call to arms the environmental movement has been longing for. It told the world’s 1.2 billion Catholics — and everyone else for that matter — that it is our moral duty to save the earth from this ongoing manmade destruction. The encyclical helped close the gap between science and religion, and pointed out that the world’s most vulnerable citizens suffer the brunt of climate instability. It also called out capitalism, consumerism and greed as primary culprits for the earth’s destruction.

Sure enough, the encyclical was taken as sacrilege among prominent Republican Catholics here at home, including Jeb Bush and Rick Santorum, who suggested the pope leave science to the scientists, which of course, is precisely what he did. Conservatives like Jeb Bush did not appreciate the swipe at his one true religion, capitalism. “I don’t get economic policy from my bishops or my cardinal or my pope,” he told his supporters at the time.

Climate change has amazingly and depressingly become the most contentious issue in America, more so than abortion, according to recent polling from the Carsey Institute. At least the pope is on the correct side of this inexplicably polarizing issue.

2. Pope Francis said women who have had abortions can be absolved of their “sin.”

The pope did not go quite so far as to suggest that abortion is not a mortal sin, but he did go where no pope has gone before when he recently announced a year of mercy (starting this December) during which women who have had abortions can seek and be granted absolution. Repentance is, however, a prerequisite. It's not a full-on feminist victory or anything, but it is a tiny step.

That did not go over well among our rabid anti-abortion (and it seems, anti-forgiveness) wing like Huckabee, Cruz, Santorum and Walker, for starters. And once again, Jeb Bush found himself disagreeing with and even lecturing the leader of his faith, suggesting that if anyone deserves mercy, it isn't those sinful women, it’s the “unborn.” Bush did like the sound of repentant women, though, and gave lip service to being pro-mercy.

3. Pope Francis called unfettered capitalism the “dung of the devil.”

You have to love Pope Francis’ way with words. On a July visit to Bolivia and its left-leaning leader, the pope denounced the “new colonialism” in which richer countries and international banks impose austerity programs on developing nations. In a sweeping speech that sounded quasi-socialist, the pope said the poor have the “sacred rights” to labor, lodging and land. He again called for a halt to the destruction of the earth before it is too late, destruction that disproportionately affects the world’s poor.

Needless to say, conservatives did not care for the pope’s description of capitalism as Lucifer’s fecal material.

The integration of environmental, economic and moral issues puts the pope on a par with some of the deeper and more radical thinkers of our time, like Naomi Klein, who recently gave a shout-out to Francis as a role model of the kind of transformational leader the world needs now.

For a man of the cloth, Pope Francis has a refreshing admiration for science. The world witnessed that with his encyclical on the environment, where he threw his lot in with science. We saw it again when he said one can be a good Catholic and believe in evolution and the Big Bang, and that neither are incompatible with the existence of a creator.

Speaking at the Pontifical Academy of the Sciences recently, the pope said, "When we read about Creation in Genesis, we run the risk of imagining God was a magician, with a magic wand able to do everything. But that is not so."

It’s a tough communion wafer to swallow for Bobby Jindal and other right-wing creationism advocates.

5. Pope Francis made it easier and cheaper to get marriages annulled.

It was a small bureaucratic change in some ways, but it spoke volumes about forgiveness, the recognition that families have changed, and making more people feel welcome in the Catholic hurch. On September 8, the Vatican unveiled new rules to make it easier, faster and less costly to obtain an annulment. Both of Francis’ predecessor’s, John Paul II and Benedict XVI had gone in exactly the opposite direction, consigning the miserable in marriage to eternal togetherness, or living in sin.

“This is a 180-degree change in direction,” James Bretzke, a professor of theology at Boston College, told the Guardian. “Francis has shown us over and over again his [different approach], which is, let’s look at the people in the pews, in the barrios, in the field, and let’s respond to them in their existential needs."

An easier, less intimidating annulment process is one thing, but the even larger and more contentious issue is whether the Church will ease its stance on divorced Catholics, and whether they can take communion. That and other issues affecting the modern family will be discussed at a meeting of the Synod of Bishops next month. But the annulment move makes it seem a lot more possible that communion for the divorced may be on its way.

American conservatives were pretty quiet about this change, probably because many of them have been divorced and remarried multiple times (Kim Davis), so that would be pretty hypocritical.