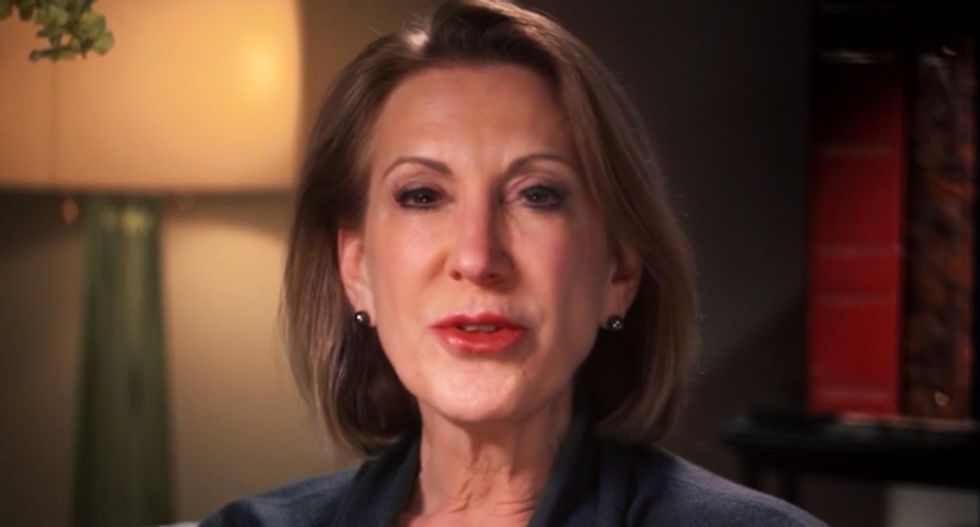 Five short months into her surprising presidential run, former HP CEO Carly Fiorina is not only moving to the top of the polls, she is also gaining a reputation as the campaign's biggest liar -- an impressive feat in a field full of politicians.

While fellow outsider Donald Trump has been notable for his self-promoting bombast, and retired neurosurgeon Ben Carson has developed a reputation as a somnolent gaffe machine, Fiorina is now spending more time explaining away untruths she has uttered than making the case for her presidency.

In doing so, Fiorina has often compounded lies with more lies.

Fiorina's latest involves a statement she previously made on the Supreme Court's ruling on gay marriage -- calling that and other court decisions "the law of the land." Confronted over her comments by a conservative radio host she was trying to impress, Fiorina denied making the comments, stating, “I think that is a quote from someone else, not from me,” despite the fact that her words were on tape.

Since the last GOP debate, Fiorina has been fending off accusations that she lied that evening about the heavily criticized Planned Parenthood tapes, saying one of them showed "a fully formed fetus on the table. Its heart beating. Its legs kicking. While someone says, 'We have to keep it alive to harvest its brain.' "

Despite multiple fact checkers who have reviewed the unedited videos saying no such scene exists, Fiorina still insists that she saw it, stating, "No, I don’t accept that at all. I’ve seen the footage. And I find it amazing, actually, that all these supposed fact checkers in the mainstream media claim this doesn’t exist, they’re trying to attack the authenticity of the videotape."

Setting new standard for journalistic accuracy, Fiorina then challenged members of the mainstream media to watch the entire unedited videos and then prove to her that they didn't see the scene -- that doesn't exist -- in question.

Previously Fiorina has claimed that she didn't know a European subsidiary of HP had been selling materials to Iran while an embargo was in place. Through a campaign spokesperson for her failed California Senate campaign the candidate claimed that, "To her knowledge, during her tenure, HP never did business in Iran and fully complied with all U.S. sanctions and laws."

In a recent interview with a radio host, she stated, "That was after my time. So I actually am not aware of that. I mean, apparently they were named that, but I don't know that. You know, it was after my time there. I can't speak to that."

However that wasn't true either, as she personally awarded the seller, Redington Gulf, HP Wholesaler of the Year in 2003 -- two years before she was unceremoniously fired by the HP board.

When she is not outright lying, Fiorina has been accused of shading the truth: implying a rags to riches story of rising from a lowly secretary to Fortune 500 CEO without noting she was the daughter of  the dean of Duke Law School, who briefly took the job before heading off to Europe for a year with her new husband after she graduated from Stanford.

Fiorina has also played fast and loose with the facts about her tumultuous CEO career, saying her actions improved the HP by increasing sales and expanding the business without noting the 65 percent drop in HP stock  during her tenure, and the massive  layoffs that followed  her ill-fated $24 billion merger with computer maker Compaq.

Recently Yale School of management professor Jeffrey A. Sonnenfeld described Fiorina as having "an almost psychopathic denial of reality."

Rep. Lauren Boebert (R-CO) is facing blowback for her anti-Muslim remarks about Rep. Ilhan Omar (D-MN), but her apology may complicate efforts to formally punish her.

A Democratic faction wants to strip the Colorado Republican of her committee assignments for suggesting that Omar could be a terrorist, but Boebert issued an apology over the weekend and has reached out to the Minnesota Democrat's office, unlike previous GOP lawmakers who faced consequences for their bigoted remarks, reported Politico Playbook.

On Monday, in an article for New York Magazine on a "safe space" café for Republicans on the Upper West Side of Manhattan, Shawn McCreesh reported that longtime Donald Trump ally Roger Stone says he doesn't usually feel safe walking on the street in this part of New York City — because he fears being attacked by liberals.

"A Nixon Republican and Roy Cohn disciple — Nixon lived on Fifth Avenue, and Cohn on East 68th — Stone says he loves New York, but that he hasn't returned to the city since the FBI raided him in 2019," wrote McCreesh. "When he is here, he claims the Upper West Side is no longer safe for him. 'People who don't share my political point of view might verbally and sometimes physically attack me,' he says."