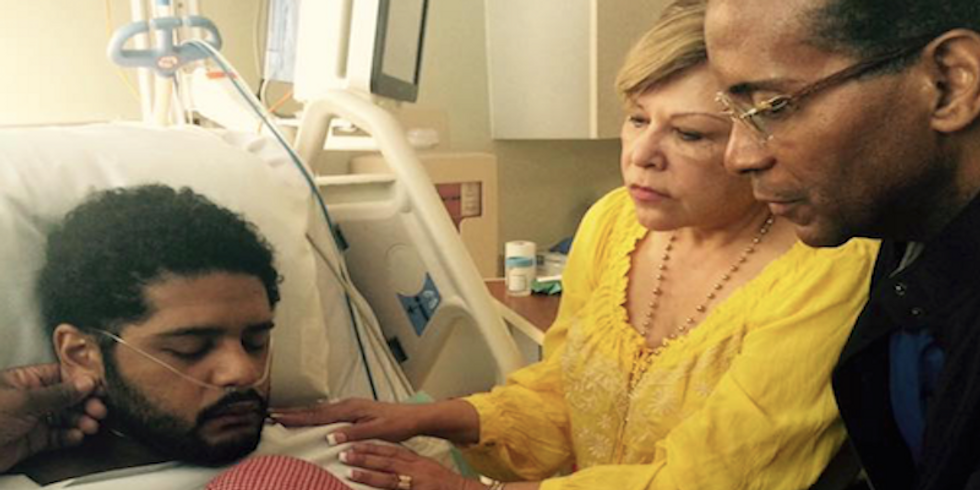 Alan Pean is a 26-year-old biology student with no criminal record or history of violence. But on August 27th, he was shot in the chest by an off-duty Houston police officer working as a security guard at the St. Joseph Medical Center. The police are claiming that Alan became combative and that they followed standard operating procedure. It's Alan, they say, who is as fault, and they have charged with two counts of aggravated assault against a public servant. He was arraigned today.

According to the Houston Police Department's statement,

Officers Ortega and Law were working extra jobs as security at St. Joseph Medical Center at the above address when they were summoned to the eighth floor to help nurses subdue a combative patient.  Once the officers arrived, the patient continued to refuse to comply with the nurses and officers' demands.  The patient suddenly physically assaulted Officer Ortega, striking him in the head, causing a laceration.  At that time, Officer Law deployed his conducted energy device, which had no apparent effect on the suspect who continued to assault the officers.  Officer Ortega, fearing for his and his partner's safety, then discharged his duty weapon, striking the suspect one time.

But the family and medical professionals are disturbed by the handling of Alan's case and what looks like a failure on many levels. Alan had driven himself to the hospital the night of August 26, during an acute mental health crisis. When he got there, he crashed his car and was treated for those injuries. But the mental health issues, which were what brought Alan to the hospital in the first place, were ignored, according to the Pean family. Alan's father, himself a physician, begged the hospital to get his son a psychiatric evaluation given that Alan had suffered a similar episode in 2009. But the hospital decided he was ready to be discharged, clearing him a mere minutes before the shooting. How did he go from being cleared to leave to so combative that only a bullet could protect two officers?

Medical neglect followed by the use of excessive force led to what could have very easily been a fatal shooting. Health care professionals have started a petition condemning the presence of guns in hospitals and the criminalization of patients and mental health patients in particular. It reads

Personally and professionally, we are shaken by the reality of this epidemic of police brutality, in which no one-- no son of a doctor, no college student, no tender-hearted soul of color remains immune. We stand with shaken hearts and rooted conviction, to speak our collective outrage for Alan Christopher Pean, our gentle friend, a 26 year old who was inexcusably shot in the chest by a police officer, while seeking care as a patient."

Alan's family is focusing on making sure this never happens again. Alan's attitude is particularly inspiring and generous. He wrote on his Facebook page,

The anguish caused by trying to understand why (according to the hospital) this had to happen to me has only started. Is it because I look a bit different that I had to be shot without a second thought about my life or my personhood? I try not to think that's the case, but I seem to find myself at that conclusion as I delve deeper into my case, as well as those similar to mine. I pray with all my heart that people change, and I have faith that we can for the better. I love myself, and I love humanity, but I don't believe that humanity or American society willfully wants things to be this way...

So I will fight until I know every person seeking medical help will have his or her right to pursue a better life protected. Keep guns out of places of healing. Help stop this madness, and let's make our society a better place. Where love and understanding falters, confusion and hate breeds.

Alan's older brother, Christian, a 27-year old in his last year of year medical student at New York's Mt Sinai School of Medicine, is concerned about Alan’s suffering and at the same time determined to protect others from a similar neglect and abuse. I spoke to him today after his brother was arraigned and he said,

This entire ordeal has been an absolute nightmare for Alan and our family. We're trying to trust the system and hope that truth prevails, though the reality is that the system has failed us miserably at every conceivable juncture in this matter thus far. Our main focus is just making sure Alan doesn't go to prison right now. From my perspective and my father's perspective as healthcare professionals, the entire thing still has us completely beside ourselves.

However, at this time, all we can do is hope that Alan's supporters continue to send love and compassion his way, and that we have more answers to how this could have happened, and how it can be considered appropriate in anyone's eyes. We are of the belief that this should never happen to anyone again.

I also spoke to Christian on my radio show last week about guns in hospitals, how patients are usually dealt with (spoiler alert: not with guns) and the role of race and bias. Listen to the entire interview below. It starts at 5:56.
For customer support issues contact support@rawstory.com. Report typos and corrections to corrections@rawstory.com.