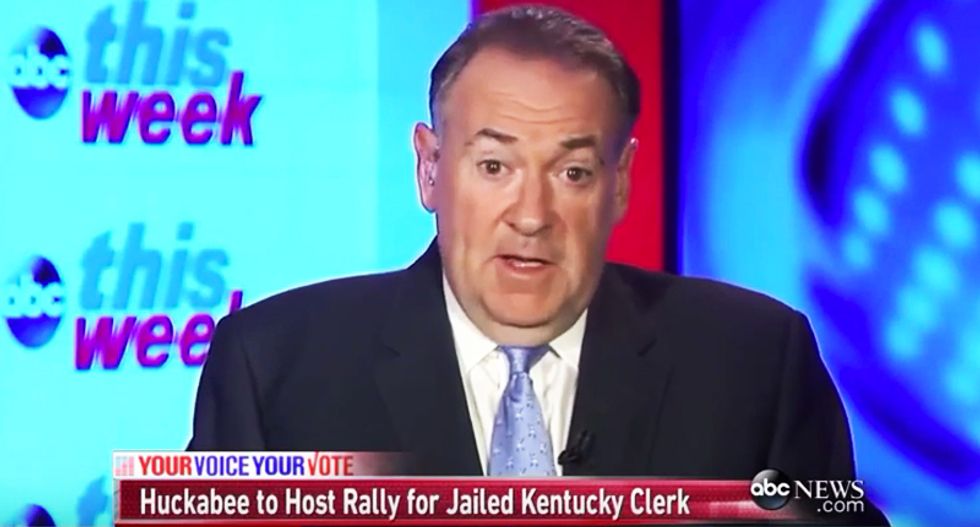 Did you know Rosa Parks was a board member for Planned Parenthood? Which, according to the Republican presidential candidates from Wednesday night, means that she was a supporter of  "heartlessly bartering and selling the body parts of human beings" (Ted Cruz, who wants this supposed baby-killer on the $10 bill) and that she believed "in the systematic murder of children in the womb to preserve their body parts" (Chris Christie). Just as a reminder of how ludicrous things have become.

Another reminder: Roy Edroso's keen eye for conservative absurdity lands on this delicious specimen, A.D.P Efferson of The Federalist, who deigns to diagnose pro-choicers as people who support mass murder because they just don't know any better, the poor dears!

But in all my experience with pro-choice friends or acquaintances, I would never characterize them as monsters capable of doing what we’ve seen in the recently released videos that exposed the horrific practices of Planned Parenthood.

Even as the abortion industry and its supporters come up with new and cleverer ways to defend the wholesale destruction of human life, I am still hesitant to call all those who are pro-choice evil. After all, they don’t behave as evil people. They love their kids, they volunteer at schools, they attend church, they’re civically minded, hard-working people who love their families as much as I love mine.

So why, since conservatives have decided that abortion---or really, since the target is contraception funding, cheap contraception---is now worse than the Holocaust and the genocide of Native Americans combined, are they not monsters? Because they are too stupid to be held morally responsible! Tah-dah!

Shedding light on this idea is Clay Jones from Biola University, who has spent the last several decades studying the psychology of genocide. His research exploring human depravity attempts to answer the hard questions about humanity, such as: Who are these people who commit mass murders? How do normal citizens slaughter their own countrymen without so much as a second thought?

More bewildering than the brutality, if that is even possible, is the truth about who committed these acts of horror. Jones reveals to us through the eyewitness accounts of those who were victimized by these atrocities the frightening normalness of people who perpetrate evil. There is nothing significantly different about them either in manner or appearance than any other person you might meet on the street, or even have in your home for dinner.

I would like to take a moment to note that a side effect, which is probably a side benefit for right wingers, of this line of argumentation is that it also happens to reduce the moral responsibility for those that support fascism. As the clamor of nativist rhetoric grows louder, I can definitely see why conservatives might want more people believing that hard right, racist ideologies like Nazism weren't that bad, because the people who supported them walked dogs.

This has always been a part of the "abortion is genocide!" argument, which is why it's a popular one amongst more hardline conservatives. It isn't just about trying to make abortion seem evil. It also happens to make genocide seem less bad, by hinting that the people who are exterminated have no more value than an embryo, that the loss of millions of people to the gas chambers and the loss of fertilized eggs to the normal churn of reproduction are the same thing. That this is a favored line of argument by people who, say, can't recognize the humanity of the Syrian refugees is not a coincidence.

But that's just a side benefit of this Efferson's argument here. This is obviously just an extension of the general move in anti-choice circles to paint women who get abortions as braindead bimbos who don't know any better and need to be forced into the "right" choice to show them the error of their sex-having ways. We're supposed to be grateful she doesn't think we're monsters because we see through the obviously hyperbolic language that equates the loss of Ann Frank with the loss of a 12 week pregnancy.

Well, I reject her condescension. Nor will I offer her the same faux olive branch. Because, if Efferson really does think abortion is genocide, then that actually makes her and all other anti-choicers literal monsters. Because they really, truly do not act like they think it's a genocide.

Let's think of the Republican debate. They spent about 5 minutes on abortion, and everyone got a chance to take a potshot on the issue before moving on. If they really thought it was genocide, this behavior would literally be monstrous. "Okay, everyone, 5 minutes for your thoughts on the mass extermination of an entire race of people, and then we have to move on to talk about whose face you want on the $10 bill."

If I found out that one of my friends favored killing off all the Jews, I would stop being their friend. I would also warn everyone else about them. But Efferson claims to believe being pro-choice is the equivalent of wanting to kill all Jews, but she says she's friends with pro-choice people anyway. Because they have dogs and stuff. What the fuck, lady? If you really think they are Nazis, why are you so nice to them? Would you also be friends with an actual Nazi? You said they're the same thing!

Someone's attitudes about human life have coarsened, but it's not pro-choicers. The relentless facile and glib comparisons of abortion to murder have a noticeable effect on anti-choicers, in that it minimizes murder to them. "Murder" is just a word they toss around to condemn people for having sex without permission. "Genocide" is nothing more to them than pursing their lips at some college girl for choosing her career over early marriage. It deadens their ability to react with humanity when faced with actual killing of real people.

If you doubt that, look at how Mike Huckabee reacted to the Syrian refugee crisis:

The former Arkansas governor and Republican presidential candidate accused Syrian refugees of having “nefarious” or perhaps merely trivial reasons for fleeing the civil war that has devastated their home country, reported the Washington Post.

“Are they really escaping tyranny, are they escaping poverty, or are they really just coming because we’ve got cable TV?” Huckabee asked Monday during an event at the conservative Eagle Forum. “I don’t meant to be trite. I’m just saying, we don’t know.”

When you relentlessly compare embryos to actual people, that doesn't elevate the status of embryos in your eyes. It just makes you incapable of recognizing the suffering of living, breathing people.