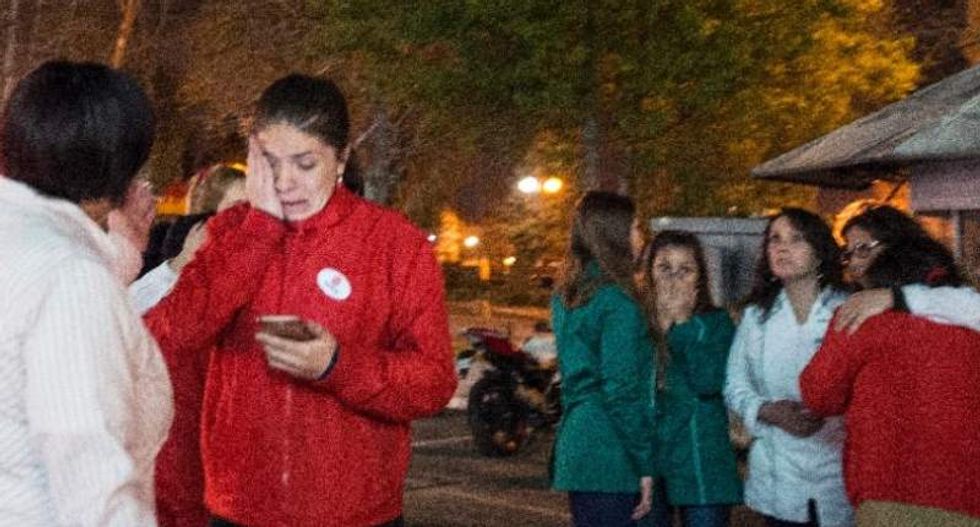 People stand in the street during a 8.3-magnitude earthquake in Santiago on Sept. 16, 2015. Photo by Martin Bernetti for Agence France-Presse.

A massive 8.3-magnitude earthquake struck the center of Chile, leaving at least two people dead and triggering the evacuation of coastal areas and warnings that tsunami waves could reach as far as Japan.

At least two people were killed and 10 hurt in Chile, where terrified residents rushed out onto the streets in the capital Santiago and beyond, as far away as Argentina.

The United States Geological Survey (USGS) put the shallow offshore quake at a magnitude of 8.3 and said it hit just 228 kilometers (about 140 miles) north of Santiago, a city of 6.6 million people.

The Chilean government put the earthquake at 8.0 on the Richter scale.

Interior Minister Jorge Burgos said that the evacuation of coastal towns and cities was ordered as a precautionary measure.

The quake was felt as far away as Buenos Aires, in Argentina, about 1,400 kilometers away, while a tsunami warning was initially in place for the whole of Chile and Peru's Pacific coastline.

In Santiago, there were scenes of pandemonium as thousands fled swaying buildings, an AFP reporter said.

There were similar scenes of panic in coastal La Serena, in the north of Chile.

"People were running in all directions," said Gloria Navarro.

"We went into a panic and the floor kept moving. We went out into the hallway and down the stairs," Celina Atrave, 65, who lives in a 25-story high-rise near downtown Buenos Aires, told AFP.

The Hawaii-based Pacific Tsunami Warning Center said that "hazardous" tsunami waves were possible for some coasts, including above three meters (10 feet) the tide level along parts of Chile's shoreline.

Tsunami waves were also possible along French Polynesia, it said, as well as smaller waves as far afield as Alaska, Japan and New Zealand.

The precautionary alert for Peru was later called off, civil defense officials said, but scared residents in the city of Ilo, close to the border with Chile, remained out on the streets and in high areas nonetheless.

In April last year, a deadly 8.2-magnitude earthquake in northern Chile killed six people and forced a million to leave their homes in the region around Iquique.

And a February 27, 2010 quake that struck just off the coast of Chile's Maule region measured 8.8 in magnitude, making it one of the largest ever recorded.

It killed more than 500 people and inflicted an estimated $30 billion in damages.