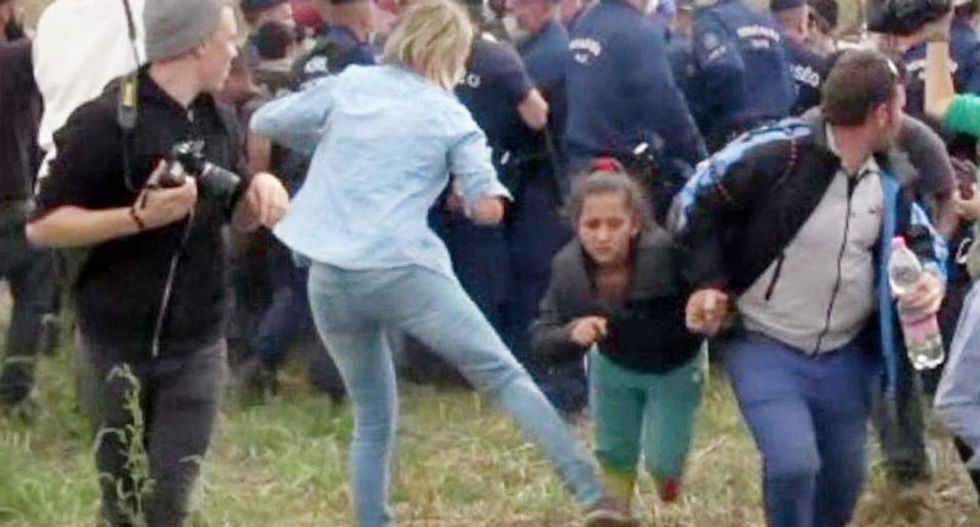 Video grab of a Hungarian TV camerawoman tripping a child as she run with other migrants from police during disturbances at Roszke, southern Hungary, on September 9, 2015 (AFP Photo/-)

A Hungarian camerawoman who caused global outrage after being caught on film tripping and kicking refugees as they fled police apologised Friday and said that she has received death threats.

"I panicked. I'm not a heartless, child-kicking racist camera-person," Petra Laszlo wrote in a letter to Hungarian newspaper Magyar Nemzet published on its website.

"As I watch the footage now, it's like I'm not watching myself. I honestly regret what I have done and take responsibility for it."

In the footage, which spread rapidly across the Internet earlier this week, Laszlo, 40, can be seen tripping a man sprinting with a child in his arms, and kicking another running child near the town of Roszke, close to the border with Serbia.

She was fired from her job at N1TV, an Internet-based television station close to Jobbik -- seen as one of Europe's most extreme far-right parties -- and also faces criminal charges for breaching the peace.

Laszlo was detained for questioning by police on Thursday and later released.

"Only now could I get myself together enough to be able to write. I'm in a state of shock because of what I did and what has been done to me," she wrote to the newspaper.

"I was recording with the camera when hundreds of migrants broke through the police cordon, one of them ran into me and I panicked.

"I was afraid as they were rushing toward me and then something snapped in my head. As I had my camera in my hand I couldn't see who was coming at me, my only thought was that I was going to be attacked, and that I had to defend myself," she added.

She added that as "a mother I'm particularly sorry that fate had it that a child was running at me, and I wasn't able to sense that.

"It's not easy to make a good decision when you're in a panic."

A "Wall of Shame" page on Facebook featuring pictures, videos and commentaries linked to the incident had gathered more than 35,000 "likes" by Friday.

"You are a disgrace to your profession," was the typical sentiment from one user.

Laszlo said she did not "deserve either the political witch hunt that is going on against me or the smears or the many death threats".

"I'm just a woman, now unemployed mother of small children, who made a bad decision in a panic situation."

According to Hungarian media, Laszlo has been a camerawoman for 20 years, having previously worked for right-wing channel Echo TV.

Hungary has become a frontline state in Europe's migrant crisis with more than 175,000 crossing the border with Serbia this year. Almost all seek to travel onwards to western Europe.

The authorities have struggled to cope and are building a fence four metres (13 feet) high all along the 175-kilometre Serbian border, despite widespread criticism in Europe.