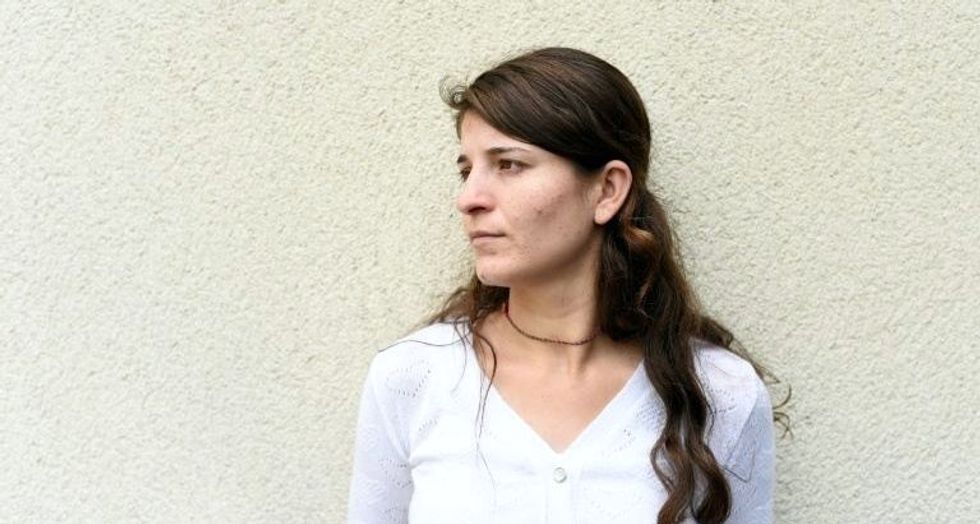 AFP/AFP - Jinan, 18, an Iraqi Yazidi and survivor of the Islamic State jihadist group has co-written a book on her ordeal called: "Esclave de daesh" (Daesh's Slave)

Kidnapped, beaten, sold and raped: the Islamic State group is running an international market in Iraq where Christian and Yazidi women are sold as sexual slaves, a teenager who escaped told AFP on Tuesday.

Jinan, 18, a Yazidi, was captured in early 2014 and held by IS jihadists for three months before she managed to flee, she said on a visit to Paris ahead of the publication Friday of a book about her ordeal.

Seized as IS fighters swept through northern regions inhabited by the Yazidi religious minority, Jinan was moved around between several locations before being bought by two men, a former policeman and an imam.

She described to AFP how she and other Yazidi prisoners were locked up in a house.

"They tortured us, tried to forcefully convert us. If we refused we were beaten, chained outdoors in the sun, forced to drink water with dead mice in it. Sometimes they threatened to torture us with electricity," she said.

"These men are not human. They only think of death, killing. They take drugs constantly. They seek vengeance against everyone. They say that one day Islamic State will rule over the whole world."

In the book, Jinan describes how once, in Mosul, she was led into "a massive reception hall with large columns ... dozens of women were gathered there."

"The fighters circulated among us, laughing raucously, pinching our backsides," she writes in "Daesh's Slave", using an Arabic acronym for the jihadist group.

She said one man complained, saying: "That one has big breasts. But I want a Yazidi with blue eyes and pale skin. Those are the best apparently. I am willing to pay the price."

During such "slave markets" she saw Iraqis and Syrians but also Westerners whose nationality she could not discern.

The best-looking girls were reserved for the bosses or wealthy clients from Gulf nations.

Once she was sold, Jinan's days were punctuated by men's visits to the house where she was imprisoned with other women.

- A pistol for a brunette -

Fighters came to make their purchases in the foyer where traders acted as intermediaries between the slave owners and emirs who inspected the "livestock", Jinan wrote in the book, which was written with the help of French journalist Thierry Oberle.

"I will exchange your Beretta pistol for the brunette," said one of the traders. "If you prefer to pay cash it is $150 (133 euros). You can also pay in Iraqi dinars."

Convinced that she did not speak Arabic, Janin's two owners spoke freely in front of her and one night she heard a conversation revealing the extent to which the slave trade is run like a business.

"A man cannot purchase more than three women, unless he is from Syria, Turkey or a Gulf nation," said one, named Abou Omar.

"It's good for business," replied the other, Abou Anas. "A Saudi buyer has transport and food costs that a member of the Islamic State does not. He has a higher quota to make his purchases profitable.

"It is a good deal: the Islamic State increases its profits to support the mujahideen and our foreign brothers are satisfied."

After managing to escape using a set of stolen keys, Jinan made her way back to her husband and is now living in a Yazidi refugee camp in Iraqi Kurdistan.

"If we go back home, there will be other genocides against us. The only solution is that we have a region to ourselves, under international protection," she told AFP.