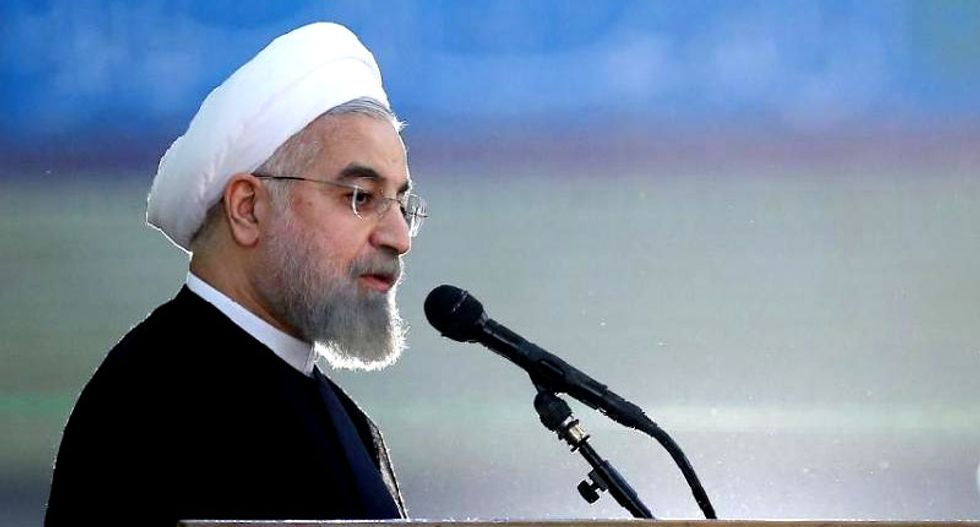 A handout picture released by official website of Iranian President Hassan Rouhani shows him giving a speech on eve of the 26th anniversary of the Islamic revolutionary leader Ayatollah Ruhollah Khomeini's death, in suburb of Tehran, on June 3, 2015 (AFP Photo/)

Iranian President Hassan Rouhani has said most Iranians support the nuclear deal he signed with the United States and that state institutions will likely ratify it.

In an interview with the CBS show "60 Minutes" broadcast Sunday in the United States, Rouhani said America was still distrusted in his country but that the deal would help mend ties.

"The majority of our people, in opinion polls, have a positive view of the agreement," he told CBS interviewer Steve Kroft.

"And usually institutions like the parliament and the Supreme National Security Council, are usually not far removed from public opinion and move in that direction."

In April, US President Barack Obama's administration signed a deal with Rouhani's government to release Iran from many of the economic sanctions harming its economy in return for tight controls on its nuclear program.

But Iran is ultimately led not by Rouhani but by supreme leader Ayatollah Ali Khamenei, and powerful factions in Tehran have spoken out against a deal they feel unfairly curtails their sovereignty.

"The enmity that existed between the United States and Iran over the decades, the distance, the disagreements, the lack of trust, will not go away soon," Rouhani admitted.

Khamenei, who has the final say on all policy matters, has repeatedly warned against the rise of Western influence in Iran after the nuclear agreement.

Iran and the US severed diplomatic ties in 1980 after a hostage crisis and Khamenei said last week that Iran would not hold any negotiations with Washington beyond the nuclear issue.