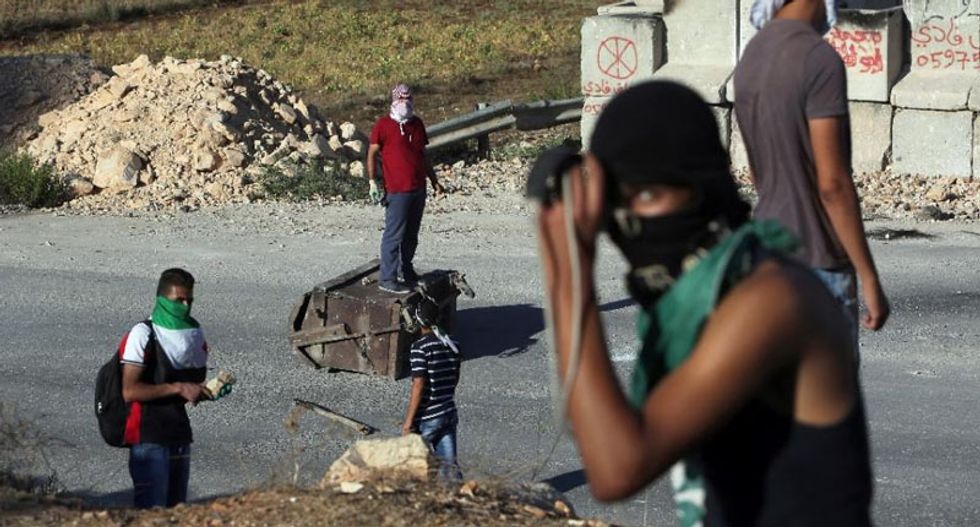 Israeli police deployed heavily on Friday to bar young Muslim men from prayers at the Al-Aqsa mosque site in Jerusalem on what Islamist Palestinian movement Hamas dubbed a "day of rage".

Palestinian protesters have clashed with police at the site for three days over Jewish new year despite international calls for calm.

Police set up heavily-manned checkpoints on streets leading up to the site in Jerusalem's walled Old City, turning back youngsters, while a police surveillance blimp flew overhead.

"It's a frontline," Mazen Shawish, 52, told AFP. "You have to go though 20 military checkpoints to get to the mosque."

Inside the compound, worshippers prayed without incident. Mosque officials estimated attendance at around 8,000, while police said there were 10,000.

Police said that ahead of the Friday prayers they had an intelligence warning that Arab youths were planning fresh confrontations and decided to keep them away.

"It was decided to limit the age of Muslim worshippers," said a police statement.

"Men aged 40 and above and women of all ages will be permitted to enter for prayers," it said.

Israeli authorities fear further trouble ahead when the Muslim feast of Eid al-Adha coincides on Wednesday with the solemn Jewish fast of Yom Kippur.

And Jews begin their seven-day Sukkot festival the following week, one of the holidays when more Israelis than usual are likely to visit the compound.

It is the most sacred site in Judaism, said to be the site of the biblical temples.

Known to Muslims as Al-Haram al-Sharif (the Noble Sanctuary), the compound houses the famous golden Dome of the Rock shrine and Al-Aqsa mosque.

Believed to be where the Prophet Mohammed made his night journey to heaven, it is the third-holiest site in Islam after the Grand Mosque in Mecca and the Prophet's Mosque in Medina, both in Saudi Arabia.

Jews are allowed to visit but cannot pray there to avoid further raising tensions.

Israel seized east Jerusalem, where Al-Aqsa is located, in the 1967 Six-Day War and later annexed it in a move never recognised internationally.

It claims sovereignty over the entire city, including holy sites.

To the Palestinians, who want the mainly-Arab eastern side as their capital, the compound with its landmarks is a potent symbol of so-far unrealised statehood.

They fear Israel will seek to change rules governing the site, with far-right Jewish groups pushing for more access and even efforts by fringe organisations to erect a new Jewish temple there.

"Al-Aqsa is ours, the Holy Sepulchre is ours," said Palestinian president Mahmud Abbas this week.

"They do not have the right to pollute them with their dirty feet, we do not allow them and we will do everything possible to protect Jerusalem."

Netanyahu has publicly "declared war" on those who throw rocks and petrol bombs, and became even more adamant after an Israeli motorist died at the wheel on Sunday night, apparently as a consequence of Palestinian stone-throwing, police said.

Israeli-driven vehicles are frequently pelted with stones where Jewish and Arab neighbourhoods rub up against each other.

One proposal is to let snipers with low-velocity rifles operate against stone-throwers in Jerusalem, as they already do in the occupied West Bank.

Justice ministry spokesman Moshe Cohen said that was one of a raft of suggestions currently under scrutiny by legal experts ahead of a government decision.

Israel's parliament, the Knesset, said in a statement on Friday that its foreign affairs and defence committee authorised the call-up of reservists from the paramilitary border police, "in response to the deteriorating security situation in Jerusalem."

It did not indicate when such a mobilisation would take place, or its likely size and duration.

The Israeli army said he was spotted by soldiers when he threw a petrol bomb at a vehicle heading for a nearby Israeli settlement.

Netanyahu is proposing measures including changing the circumstances under which police may use live fire, minimum sentences for stone-throwers and penalties against the parents of young suspects.