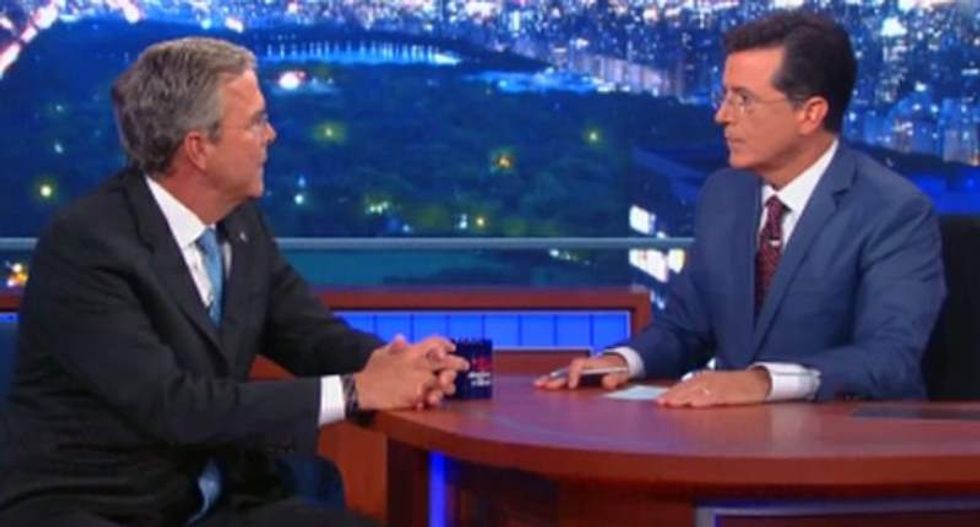 Former Florida Gov. Jeb Bush got a response from the Late Show audience, though maybe not for the reasons he intended, while explaining his campaign logo to host Stephen Colbert on Tuesday.

"I've been using 'Jeb!' since 1994 -- it connotes excitement," Bush explained, drawing a laugh from the crowd and Colbert.

"How many of us when we got excited about things, didn't just go, 'Jeb!'" Colbert responded.

Bush was also somewhat critical of his brother, former president George W. Bush, saying he "didn't bring the hammer down" on spending by GOP lawmakers during his two terms.

"He didn't veto things. He didn't bring order and fiscal restraint," he said, leading Colbert to ask, "So he was not conservative enough?"

"On spending," Bush clarified. "Look, they called me 'Veto Corleone' in Florida because I vetoed 2,500 separate line items in the budget."

"He is an anti-hero in that movie," Colbert chimed in.

However, Colbert did not raise the issue of the Bush fundraiser that was put together without his knowledge last week, instead telling the candidate, "There is a non-zero chance that I would vote for you."