Jeb Bush vows to show more energy in GOP debate: 'If someone comes at me, bam! I'll come back at 'em' 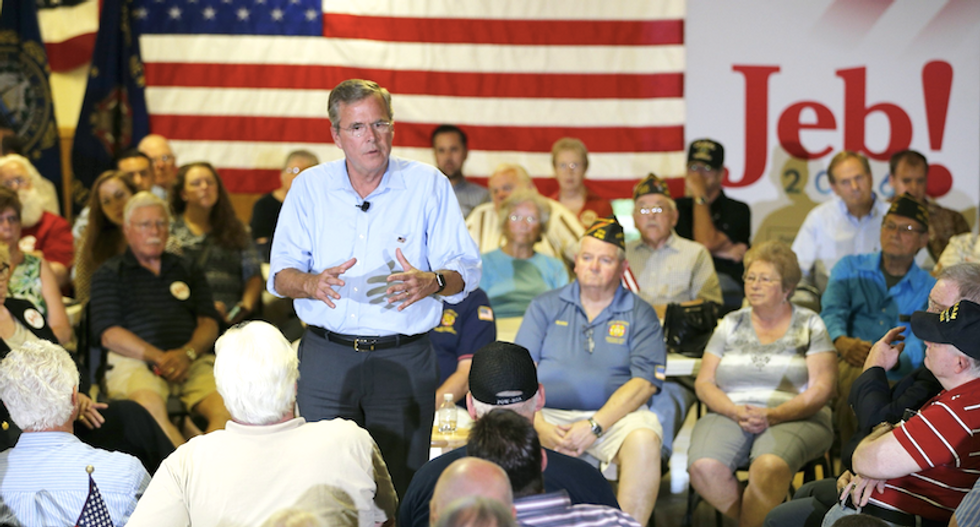 Autographing photos of himself on the campaign trail, U.S. Republican presidential candidate Jeb Bush held up one that showed him heavier by 40 pounds and another of the slimmed-down campaign model.

"That's a low-energy picture," Bush, 62, chuckled after the portly version was thrust into his hands in Salem, New Hampshire, site of a town hall event. "This is a high-energy picture," he said of the skinnier Jeb photo.

The anecdote encapsulates Bush's challenge as he prepares for Wednesday's second debate of Republicans seeking their party's presidential nomination: How to show more energy without losing his calm, steady-at-the-helm demeanor, and give a needed boost to his campaign after losing his front-runner status to billionaire firebrand Donald Trump.

Initially stung when Trump, 69, pinned the "low-energy" label on him, Bush is taking a two-prong approach, joking about it and showing more fire on the campaign trail. He plans to take a more aggressive tack at the debate at the Ronald Reagan Presidential Library in Simi Valley, California.

"If someone comes at me, bam! I'll come back at 'em," he said in Salem, smacking a fist into a palm. "I'll campaign hard."

Bush has mocked Trump, branding him a Democrat in disguise with past positions favoring higher taxes and past expressions of admiration of Hillary Clinton, the front-runner for the Democratic presidential nomination.

Republicans held their first debate in the race for the November 2016 presidential election in Cleveland on Aug. 6.

If a livelier Bush shows up at the second debate, it will be an adjustment welcomed by many of his supporters, some of whom have privately expressed concern that the former Florida governor, a favorite of the Republican establishment, could be in trouble after a dismal August.

A Reuters/Ipsos opinion poll on Friday had Trump as the breakaway leader with 26.9 percent. Retired neurosurgeon Ben Carson was at 10.4 percent. Bush was at 7.3 percent. The poll had a credibility interval of 3.8 percent.

Top Bush advisers have regularly reached out to the Bush donor class to offer updates and reassurances about their candidate's position. Their message: Be patient and don't panic.

Their belief is that the Trump storm will eventually blow over and that Bush is well positioned, armed with policy ideas, a can-do spirit and financial backing, to rise to the top.

His team so far has resisted pressure from some outside advisers to make changes in his operation in response to his static position in the opinion polls.

There is plenty of time for Bush to make his case and TV advertising is just now starting in earnest to promote Bush’s record, campaign officials said.

“This is a long race. You have to go out and earn people’s votes,” said a campaign aide.

Rather than spend money on advertising against Trump, the Bush plan is to use TV ads to introduce the candidate and show voters his record as a tax-cutting former governor with conservative street cred.

Aides say he aims to address a longstanding concern that voters see him as a possible third Bush president, not as a veteran politician with his own identity.

"They're mindful that everybody knows that he is George Bush's son and George W. Bush's brother but that people don't really know him," said a donor in touch with the Bush team.

While Bush officials assert that their man's thoughtful, policy-dominated campaign will prove to be a strength, some Republican voters would like to see more passion.

John Ruggerio, an undecided New Hampshire Republican, emerged from a Bush event admiring Bush's command of the issues but said an added element was needed.

"He's got to show a lot more pizzazz," Ruggerio said.