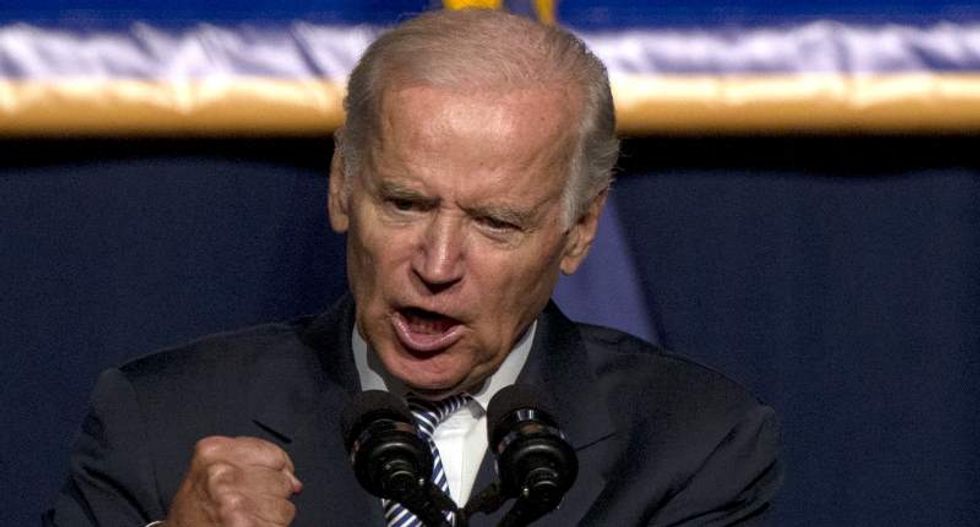 Vice President Joe Biden speaks on stage at an event to discuss the about the minimum wage at the Javitz Convention Center in New York, on Sept. 10, 2015. Photo by Brendan McDermid for Reuters.

Biden, considering a run for the 2016 Democratic presidential nomination, told a small group of Latinos gathered at his home that they should not lose heart watching Trump climb in the polls while taking a hard line on immigration.

Biden told his guests that he had seen Trump talking on television just before speaking to the poolside cocktail party, and decided to cast aside remarks his staff had prepared recognizing Hispanic Heritage Month.

"There's one guy absolutely denigrating an entire group of people, appealing to the baser side of human nature, working on this notion of xenophobia in a way that hasn't occurred in a long time," Biden told the group of about 75 people.

Biden, who is Catholic, urged the group not to feel "down" about Trump's popularity, noting that Pope Francis was about to visit the United States and likely would have a very different message about welcoming immigrants.

Biden, whose son Beau died recently, has said he is not sure he has the emotional capacity to make what would be his third run for president.

His poll numbers have climbed as he explores the possibility and as the Democratic frontrunner, Hillary Clinton, grapples with a controversy over her use of a private email server while secretary of state.

At the end of his remarks, a few people in the crowd shouted, "Run Joe, run!"

Biden, making the sign of the cross as he hurried away from the podium, said "Oh no, no, no, no, no" as if to stave off the topic.

(Reporting by Roberta Rampton; Editing by Will Dunham)