Joe Biden tells Stephen Colbert: You run for president in 2016 and I'll be your VP 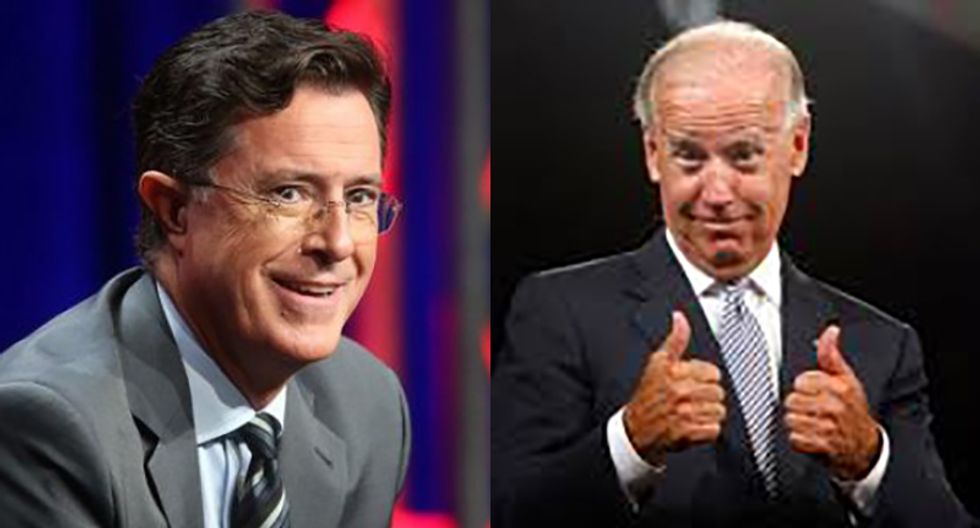 While Vice President Joe Biden has been the focus of speculation regarding a possible presidential run, he proposed a different ticket to Late Show host Stephen Colbert on Thursday, Politico reported.

"I think you should run for president and I'll be your vice president," Biden said, before offering a more sincere reason for demurring on the question, saying no one should ever run for the position unless they both know why they want to do it, and can also look at their supporters and promise to offer all of their passion and energy.

"I'd be lying if I said that I knew I was there," Biden said, according to the White House pool report. "I'm being completely honest. Nobody has a right in my view to seek that office unless they are wiling to give it 110 percent of who they are."

The interview, which is slated to air on Thursday, was slightly delayed when Biden's microphone needed to be replaced. Colbert reportedly thanked the audience for coming to his "last show" in response to the glitch, while Biden quipped, "They do this to me all the time in the White House -- shut my microphone off."

RELATED: Trump will be guest on ‘Late Show’ with Colbert on September 22

"He abhorred people who had a sense of entitlement, and he went the other way," the vice-president said of his son.

"It's going to be emotional for a lot of people if you don't run," Colbert said to close the interview. "Your example of suffering and service is going to be sorely missed in the race."