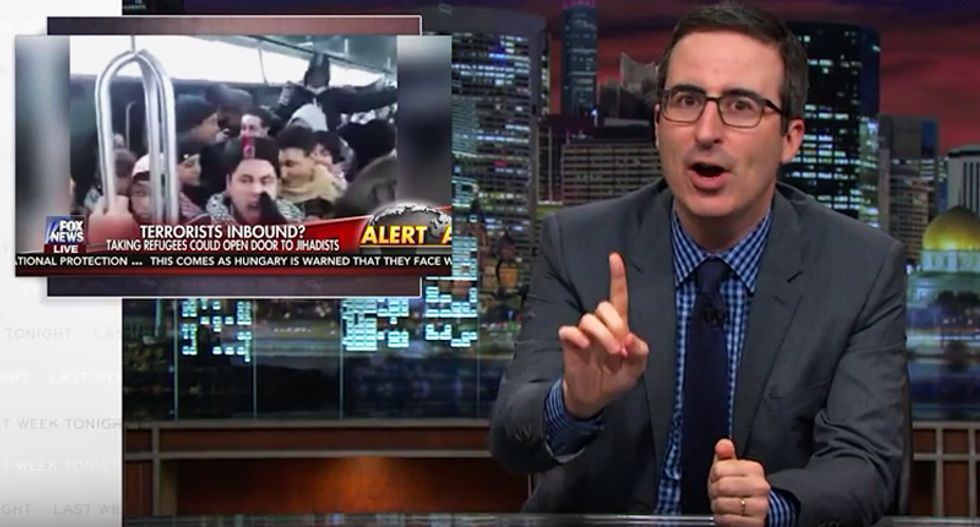 In a long segment on the refugee crisis in Europe, Last Week Tonight host John Oliver took a hard shot at Fox News for stirring up fears of terrorism by using a 5-year-old clip they found on YouTube of chanting Muslims on a train.

With the anchor introducing the clip as a "new video discovered online" the producers rolled tape of a packed train car loaded with people chanting "Allahu akbar"  (God is Great) over a caption reading "Terrorists inbound?"

The anchor then cautioned, "We're not saying that any of those people are terrorists or in any way affiliated with a terror group, but it does highlight just how many of these refugees who are fleeing violence in Iraq and Syria are Muslim."

Oliver then unloaded on the network.

"OK, first, you don't get to claim that you're not calling those people terrorists when your lower third says, 'Terrorists Inbound?' question mark. If you're really not saying they're terrorists, maybe change that to something more accurate, like 'People Take Train,' or 'Some Wear Hats, Others Less So.'" he lectured. "And second, describing that as a new video that sheds light on the migrant crisis is a little misleading, because in researching this story, we found a version of that same video uploaded onto YouTube back in 2010, well before this migrant crisis even began. And, if you are going to use misleading, old footage to make people frightened of Muslims, why stop there? Just go the whole way and use a clip from True Lies."