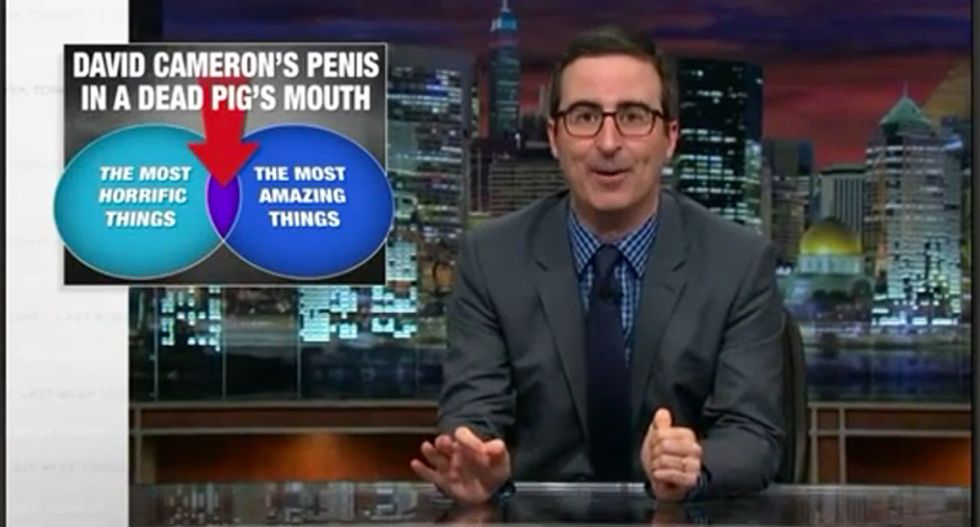 A re-engergized and positively giddy John Oliver returned to HBO’s Last Week Tonight and couldn’t wait to share news of the rumor that British Prime Minister David Cameron reportedly once stuck his penis into the mouth of a dead pig.

Last week the British tabloids blared the rumor the fairly unpopular prime minister had been accused of putting his appendage in the pig's mouth as part of a hazing ritual while in college, based upon a thinly sourced rumor in a book written by Cameron foes.

That was enough for Oliver to get going, saying, "Please, please let it be true, because a prime minister receiving oral copulation from a dead pig hits the perfect sweet spot between one of the most horrific things ever and one of the most amazing things ever.”

What delighted Oliver even more was the more how the more staid British media handled the situation, specifically the host of a call-in show after a caller said on air that the prime mister was accused of “putting his cock in a dead pig’s mouth.”

“OK, but in the caller’s defense, ‘putting his cock in a dead pig’s mouth’ is maybe the politest possible way to say it,” a smirking Oliver explained. “Consider the alternatives: ‘David Cameron was sucked-and-f*cked by a Christmas ham.’ Is that better? Is that better?! ‘David Cameron received an unenthusiastic blowie from one-third of a BLT.’ Do you prefer that? You tell me a delicate way to put this!"

Oliver then had an inspired idea.

"Go on Twitter right now and tell the British media a more polite way to put it using the hashtag #RESPECTFULINTERSPECIESFACEF*CK.”