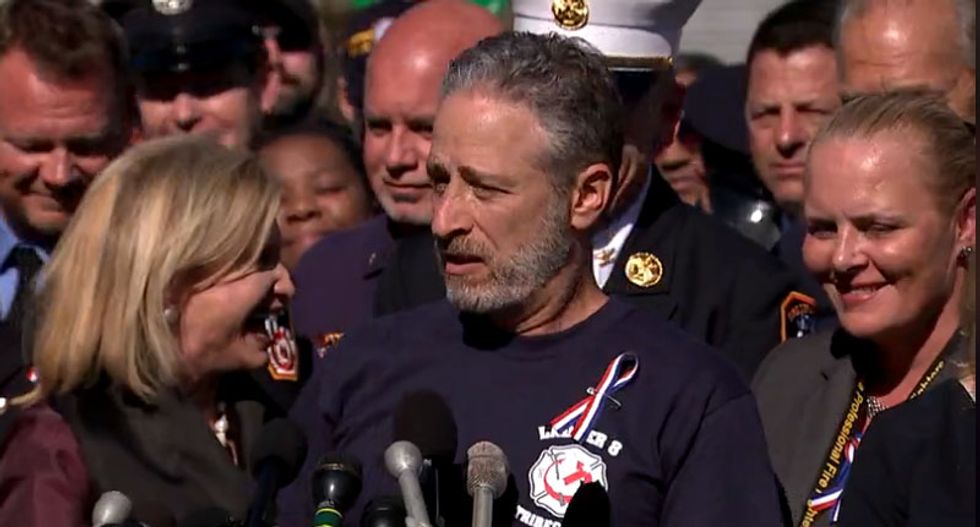 Former Daily Show host Jon Stewart is attempting to use his star power to shame Congress into permanently renewing a bill that provides health benefits to tens of thousands of first responders and rescuers who worked at Ground Zero after the terrorist attacks on the World Trade Center in 2001.

In the shadow of the US Capitol Building, the comedian apologized to the more than 100 rescue workers gathered at a rally on a Capitol lawn on Wednesday to renew funding for the James Zadroga 9/11 Health and Compensation Act, a healthcare and compensation program for men and women suffering from 9/11-related illnesses.

The act, which was passed nearly five years ago, is due to begin expiring next month, throwing into jeopardy the health programs that benefit more than 33,000 responders, including Robert Alexander, an FDNY marine engineer who was diagnosed last year with brain cancer.

Alexander said the proudest moment of his career was watching police officers, firefighters and civilians rush toward Ground Zero in the hours after the attack to help pull victims from the wreckage.

“This act of war was started in the streets of Manhattan and we need to be covered for the work we performed,” Alexander said.

Initially, the Zadroga Act – named for an NYPD detective, James Zadroga, who died at age 34 of respiratory illness after working at Ground Zero – excluded cancer from the short list of illnesses that qualified for compensation. The law was amended in 2012 to include cancer after a push by politicians who said there was sufficient evidence to link the disease to exposure to toxic chemicals at Ground Zero.

Alexander and the other responders who came to Washington on Wednesday are not just asking for an extension of the funding – they are demanding Congress permanently fund the act.

“If this fund is not permanent then the sicknesses that are increasing now, the deaths from them are going to increase dramatically,” said James Briordy, a retired marine engineer with the FDNY who now suffers from respiratory problems.

“I hope Congress takes time just to sit down and look at the people who are sick and how they got sick. They offered their lives down there and they shouldn’t be taken here.”

Research conducted in the 14 years since the terror attacks has shown that thousands of first responders and people working and living in downtown Manhattan at the time have been diagnosed with mental and physical ailments related to the attack.

It is estimated that more than 85 NYPD police officers and more than 130 FDNY firefighters have died from illnesses attributed to their exposure to dust and toxins at Ground Zero, according to Citizens for the Extension of the James Zadroga Act, a lobby group.

Stewart, who retired in August as host of Comedy Central’s The Daily Show , has long fought for 9/11 first responders, and used the show to push Congress to act on the measure several years ago. In a memorable segment from December 2010 titled “Worst Responders”, Stewart invited several first responders on to the show to talk about Congress’s reluctance to pass the bill. One of those men he interviewed, New York City-based operating engineer John Devlin recently passed away.

After the rally, Stewart joined a group of first responders to walk the halls of Congress, to draw lawmakers’ attention to the issue. Though Stewart’s presence caused a ripple of excitement on Capitol Hill, it is the first responders who are expected to do much of the talking. The day of lobbying will also include a midday press briefing to provide updates on their meetings.

Before they set off for the Capitol, Stewart had a warning for them.

“On the hill you will be exposed to possibly toxic levels of bullshit and arrogance,” Stewart said. “You’re strong men and women but these are conditions you may never have faced before. Buckle your seatbelts. Let’s get this done.”