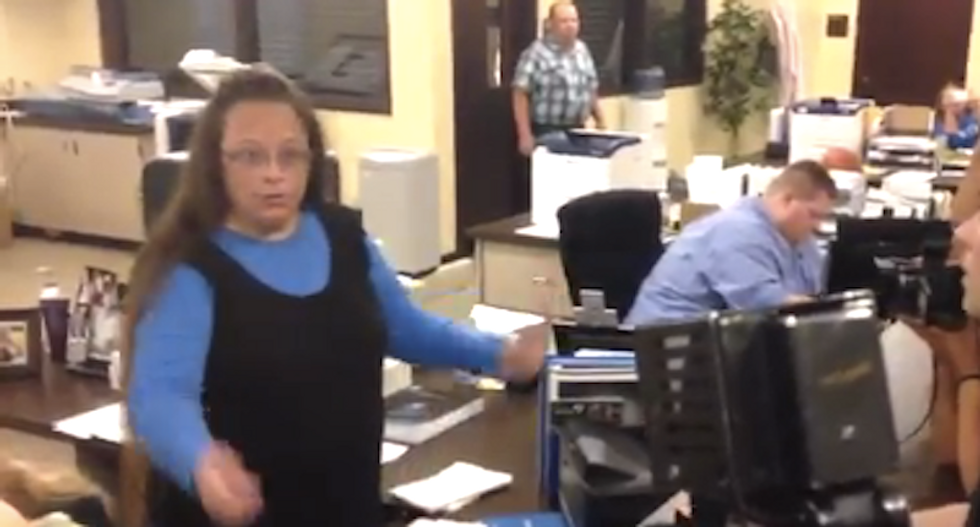 The top court ruled Monday evening that Kim Davis, the Rowan County clerk, could not be excused from following the law on religious grounds.

The clerk arrived at her office Tuesday morning just after 7 a.m., and a couple attempted to obtain a marriage license shortly after 8 a.m.

Another couple was refused about a half hour later.

An employee in the county clerk's officer denied a marriage license to the same-sex couple, who had previously attempted to obtain one three times.

The employee said Davis was unavailable to meet with the couples because she was "doing reports."

However, the clerk eventually emerged and said she would not issue the licenses to same-sex couples, and they asked under whose authority she could make that decision.

"Under God’s authority," Davis said. "I've asked you all to leave, you're interrupting my business."

The county attorney's office last week referred an official misconduct charge against Davis, who is represented by the conservative Liberty Counsel, to the Kentucky attorney general's office.

"I pay your salary," said David V. Moore, who has attempted several times to obtain a marriage license from the clerk's office. "I pay you to discriminate against me."

Moore told Davis he had been with his partner, David Ermold, for 17 years and challenged her to tell him the longest relationship she had ever had, as a friend began laughing.

"I'm going to ask you all to leave," Davis said, but the men refused. "You all are more than welcome to stay, just push back away from the counter."

Davis retreated to her office, and the group began chanting "do your job" as Moore dared the clerk to call the police.

Davis comes out to speak to another couple denied license