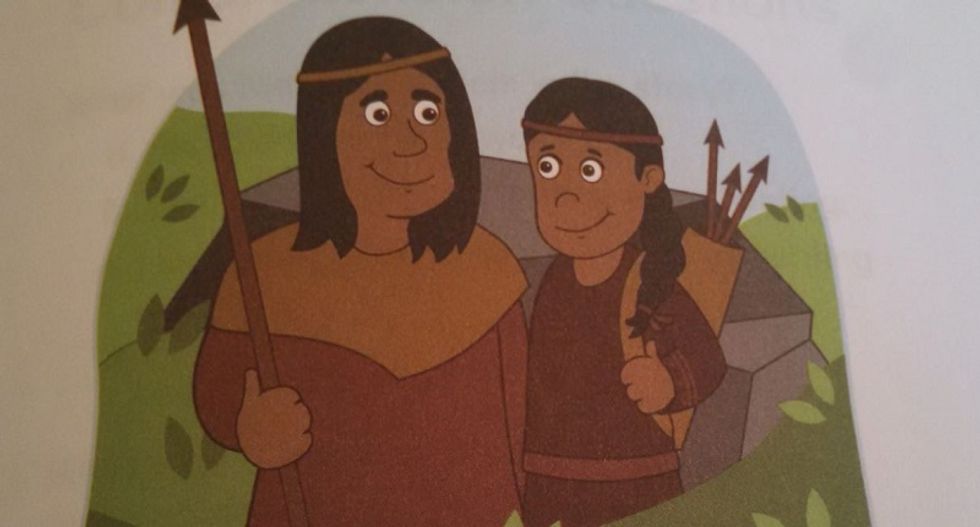 A children's book publisher is under fire for producing books that teachers said feed into racial stereotypes, at a time when the public school district is under scrutiny for wide achievement gaps between white students and students of color, the StarTribune reports.

Members of the Minneapolis public school board want an apology and a refund after publisher Reading Horizons delivered books featuring characters like Lazy Lucy, an African girl, and Nieko the Hunting Girl, who is Native American and apparently lives in a cave. The books also reference Christopher Columbus' "discovery" of America, a landmark no longer taught in those terms. In a book called "Kenya," the country's citizens are described as "able to run very fast."

The story was first reported by Sarah Lahm at Bright Light Small City, an independent publication that focuses on Minneapolis education news.

On one page, the Native American characters seem to be portrayed as primitive. Nieko's father tells her, "I am so proud of you... I will create a necklace for you from special stones. I have them in the cave."

Emotions ran high at a Tuesday school board meeting.

"Reading Horizons needs to step up to the table," the Tribune reports board member Carla Bates said. "I want them to bring me a check, bring you a check, bring the taxpayers of Minneapolis a check."

Another board member, Don Samuels, said the publisher should be forgiven, because the families of the nine African-American churchgoers slain by accused killer and white supremacist Dylan Roof forgave him.

The district paid the publisher $1.2 million for the books and a new reading curriculum. The books never made it to the classrooms due to a community backlash.

Some were also upset that the public school district selected a publisher with expressly Christian beliefs.

The Tribune reports that the Reading Horizons website extols the Christian beliefs of its employees, and that a survey shows they "believe in a higher purpose of life. We seek to do His will and to achieve balance in our lives."

The page has been removed from the web, but can still be seen in a Google search.

"It is our commitment to make sure this never happens again, and our processes have all changed," Laura Axtell, a Reading Horizons official, told the Tribune.

Axtell told the Salt Lake Tribune the company is "working around the clock" to make things right for the district. Other aspects of Reading Horizons' curriculum has already been implemented.

The district contracted with Reading Horizons as part of its Acceleration 2020 initiative, which aims to close the performance gap between white students and students of color. Only 23 percent of students of color in the district are proficient in reading and math, the Salt Lake paper reports.

The backlash apparently began when a Minneapolis teacher of color attended a Reading Horizons training session. The trainer, according to Bright Light Small City, revealed bias early by saying things like she refused to go downtown because it's "scary." When the teacher started looking through the reading material, she was outraged.

The teacher, who used a pseudonym out of fear of retaliation, took pictures of the books and posted them on social media.